Can anyone help identify a book about a group of outsider teens sucked into another universe?

I have been trying to find a book I read as a teenager for many years. I swear it was called The Outsiders with a black skull on a plain white cover, but the only book that comes up when I search is the book by S.E Hinton. This may not be the title, but I don't remember the author. What I do remember is that is it about 5 teenagers who are all outsiders or loners in their high school and for some reason they are all sucked into some parallel universe or dimension. Someplace odd, and they have to work together to find their way out. I remember there being a scene at the end where they all have doors to choose from to try and exit. There is also a scene where they fight some sort of creature in an underground area with a pool and they must escape. I know it's not much but it would be so cool if someone knew the book I'm talking about.

Four of the Outcasts don't really participate in class, and all five could care less about a group activity, so the fact that all of them actually go on the fieldtrip is something of a miracle. And when reality splits, and they end up in another dimension, you can imagine how badly they'll all wish they'd stayed home. Five outcasts fall out of reality. How many will make it back to the world as they know it? -Amazon summary

she was almost over the centre of the pool, and she had more space between herself ... down through the brightness, could see them trying to snatch their legs out of the water as the jellyfish crowded... -from Google Books. Also, there are several mentions of doors. 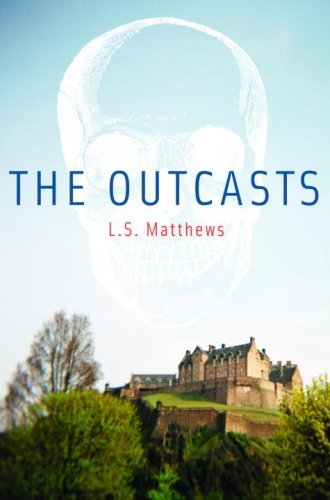 Not the answer you're looking for? Browse other questions tagged story-identification novel young-adult parallel-universe or ask your own question.