What's the deal with the circumflex accent in Chirrut Îmwe?

Do we have any information on the motivation for the accent (^) in Chirrut Îmwe's name?

Is it supposed to represent something specific?

Is it inspired by something in particular?

Or is it just trying to look a little bit unusual as many names in Star Wars do?

Are there other examples similar to this besides Padmé Amidala? (Which I consider to be a different case because it serves an orthographic purpose -- it indicates specific pronunciation change.)

This is a version of a Punctuation Shaker (warning: tvtropes). To quote that page:

One of the easiest ways to give an exotic or alien spin to words intended to have originated from an exotic language is to sprinkle it liberally with unexpected punctuation marks. [...] After the apostrophe, the second most common punctuation mark is the diaeresis/umlaut [...] Its use in fantasy was probably popularized by J.R.R. Tolkien (like MANY fantasy devices), who used it a lot. (He used acute and circumflex accents even more.)

In short, it's "just trying to look a little bit unusual".

A quick glance at the Wikipedia list of Star Wars and Legends Characters shows that apostrophes and accents are the most used alternative to "normal" letters.

That said, these are all diacritics, and they all serve orthographic purposes, so accents should not be considered separate from circumflexes. Granted one is less familiar to us as English speakers, but they are still in the same family. Obviously, some writer somewhere chose to shake things up by using a different diacritic. 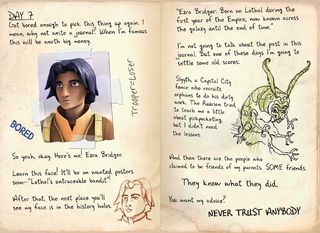 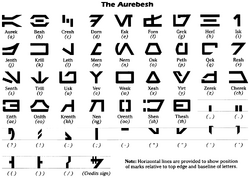 Not the answer you're looking for? Browse other questions tagged star-wars names rogue-one or ask your own question.

5
What accent do Duros speak with?
8
What's the deal with the name “Jumpstar Prime”?
11
Why didn't Chirrut Îmwe exhibit the talent he supposedly taught others?
26
Was Chirrut Îmwe a Jedi, Force-sensitive, lucky, or something else?
18
What's the origin of the name of the Tantive IV?
26
What's the relationship among the many uses of the name “Galen” in sci-fi?
8
Could Chirrut Îmwe have constructed a lightsaber out of Jyn’s kyber crystal?
44
What's the big deal about “Corellian” star ships?
7
Is there any evidence in Canon for how long specific hyperspace trips actually take in the Star Wars galaxy?