First off: I did read this and this, and sadly neither are the novel I'm looking for. I also read this a super long time ago, so bear with me if details are fuzzy.

What I remember the gist of the story being is that there was this girl, and that her parents decided it would be best if she were left in her grandmother's (I think) care. They had to drive several states away to get there and then the parents leave without any indication of when they'll be back or where they're going.

Fast-forward a bit, and it turns out that this girl is a clone of her parents' first daughter, who died 16 years ago. This lines up with the girl approaching her 16th birthday and thus nearing the age that her sister got killed in a car crash (it had something to do with a car at least; I'm not sure if it was a crash or if she just fell out). Anyway, the girl wants to separate herself from this identity, so when her grandmother tries to give her peach-flavored cereal, the girl simply states that she doesn't like peach and asks for something else.

I can't remember anything else or how it ends, but I think it came out after 2000, just not sure when exactly. I read this in fifth grade so it's been a while to say the least. 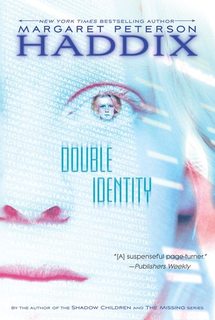 Bethany Cole lives a normal life until her parents, Walter and Hillary, abruptly ditch her, where she is introduced to her aunt, Myrlie Wilkers, whom Bethany has never met. She also lives in Sanderfield, Illinois. Bethany overhears her father telling Myrlie that Bethany does not know anything about Elizabeth. She soon realizes her parents are abandoning her without an explanation, but she begrudgingly settles in.

As she lives with Myrlie, her aunt unwittingly is able to guess all of Bethany's favourite foods. Bethany's interest in Elizabeth is sparked when one of Myrlie's friends mistake Bethany for Elizabeth. Though Myrlie has promised Walter not to tell Bethany about Elizabeth, her aunt reveals that Elizabeth was Bethany's sister, who died in a car accident before Bethany was born. Hillary had been driving the car and Myrlie's husband and Elizabeth died in the crash, though Myrlie's daughter Joss survived. Joss, who had been Elizabeth's best friend, initially mistakes Bethany for Elizabeth, noting that their exact resemblance. After seeing some home videos of Elizabeth and Joss as children, Bethany confirms that she and Elizabeth are identical, save a small scar under Elizabeth's left eye.

Elizabeth Krull - Elizabeth Krull was the daughter of Walter and Hillary. She is Bethany's older sister and died in a car accident on her 13th birthday along with her Aunt Myrlie's husband.

It's an aunt, not a grandmother, and the age involved is thirteen, but it's parents dropping the girl off and her learning that she's a clone of her dead sister who died in a car accident.

24
Novel About a Girl Who Realizes She is a Clone
8
Book about girl who learn she's a clone?