What is the size of Westeros?

I was wondering, what is the size of Westeros?

I am currently re-reading the books and it's kind of hard to keep track of time or distance with all the different POVs.

Knowing how big the continent is, it would be helpful to put things in a better perspective. For example, I have no idea if it took 3 days for the Starks to go from Winterfell to King's Landing, or 3 months.

If you can compare the size to an actual country or region, it would be great.

To sum up the points below:

How do ASOIAF regions compare to our world?

George R.R. Martin has compared Westeros to South America and Essos to Eurasia . He said:

I will post the dates and times of my signing tour in the "touring" thread uptopic. Thanks for asking.

As for your other questions (boy, you folks are relentless), I don't have the precise population of King's Landing on[sic] the exact area of Westeros immediately on hand.

In very general terms, however... King's Landing is more populous than medieval London or Paris, but not so populous as medieval Constantinople or ancient Rome.

Some readers have likened Westeros to England because they see some general similarities in its shape, and in its location off the west coast of a larger landmass. The latter is true enough (I don't see the former, myself), but Westeros is much much MUCH bigger than Britain. More the size (though not the shape, obviosuly) of South America, I'd say.

The other continent is bigger (Essos), Eurasia size.

Yes, a league is three miles.

Should you worry about how long it takes to travel in Westeros and how big it is?

Also George R.R. Martin is deliberately vague about such matters. He said in another correspondence with the fans:

I have deliberately tried to be vague about such things, so I don't have obsessive fans with rulers measuring distances on the map and telling me Ned couldn't get from X to Y in the time I say he did.

However, if you really must know, you can figure out the distances for yourself. The Wall is a hundred leagues long. A league is three miles. Go from there.

But if you turn up any mistakes in travel times by using that measure, let it be your secret.

You really wanna know, don't you?

If, to quote GRRM, you are really that obsessed fan, Well put that calculator and ruler back. Another fan has roughly done the work for you by estimating the size. According to his/her findings:

Total length of Westeros from the North Pole to the coast of Dorne: 5084.06 miles

Distance from the Wall to the treeline in Thenn: 595.7 miles

Distance from the Wall to the Arctic Circle: 300 miles

North-South Distance of the Lands Beyond the Wall (to the edge of the WoIaF map): 1,865.2 miles 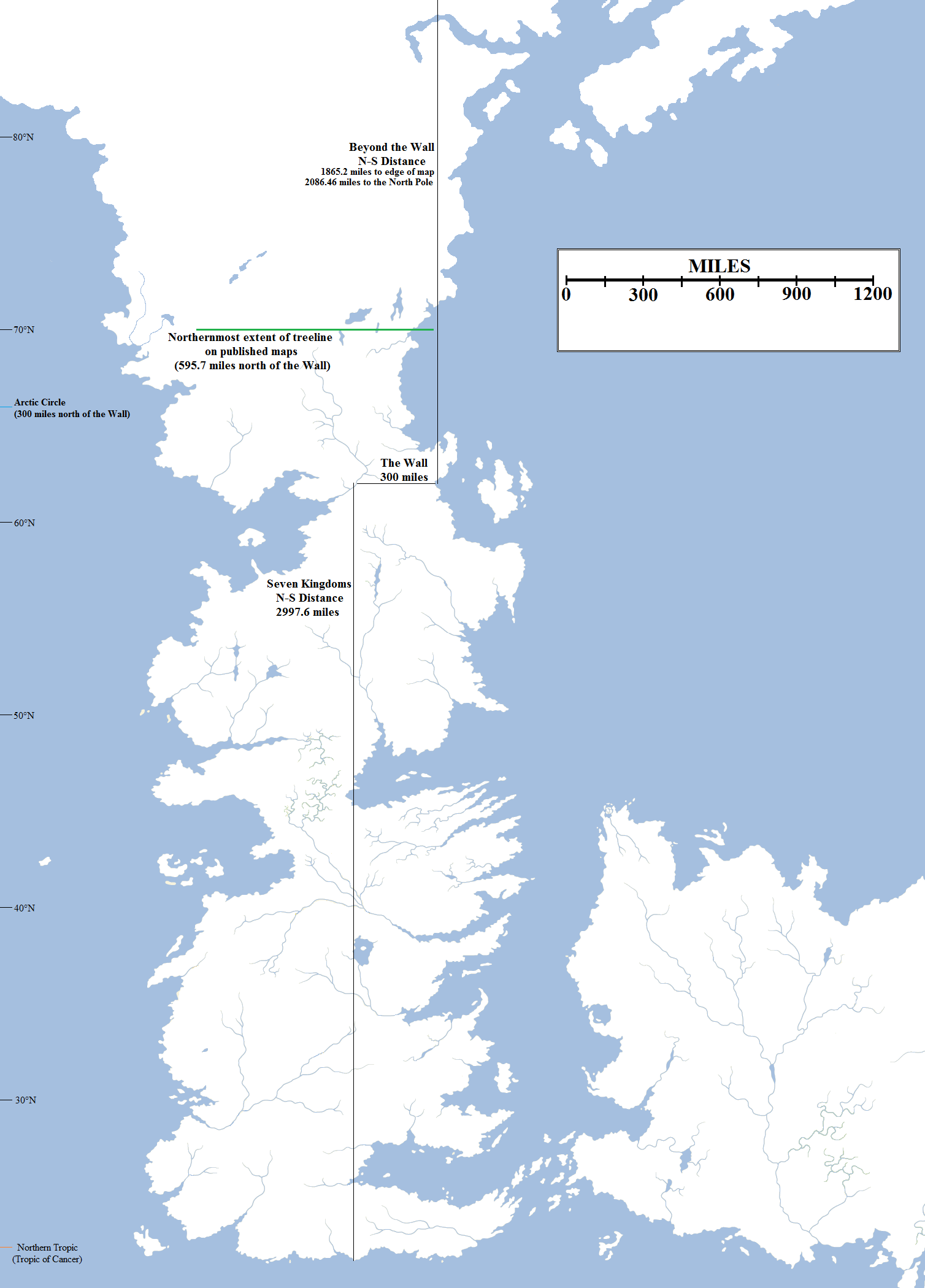 Disclaimer: These findings are not the official position of the author or the publishers. Any error's responsibility lies with the original poster. To clarify the confusion some members may have, The creator has based his recordings on a common reference system which he established from the Data GRRM has provided, explains his research in detail and identifies the potential issues with his work. I suggest taking a look at his blog post linked above..

I'm not a fan of the South America comparison. Most of the travel is among the seven kingdoms, and in one case, from the wall northward. I think it is better to compare the length of the regions north of the wall, and south of the wall, to the length Brazil.

Moreover, nobody of any real focus has traveled from The Wall to Dorne in one journey. The North, and the region that the other kingdoms constitute, are about the same size. Accordingly, you might think of each of those two as being approximately the size of Central America (i.e. from Guatemala to Panama).

Not the answer you're looking for? Browse other questions tagged game-of-thrones a-song-of-ice-and-fire geography or ask your own question.

15
Does the moss in Westeros tend to grow on the south side of the trees?

107
What is a "year" in Westeros?
17
How is there ice in King's Landing during the summer?
13
What is done with prisoners of war in Westeros?
13
What is the education system like in Westeros?
8
To what do the Great Houses of Westeros owe their longevity?
23
What exists beyond Westeros, North of the Wall and the Free Cities?
137
What do people in Westeros eat during Winter?
2
What is the size of Skull Island in Kong:Skull Island (2017) movie?
5
If Cersei is pregnant, why can't you see it?