Wouldn't giving the Grays' Sports Almanac to Biff change the outcome of the games after 1955?

In Back to the Future - Part II, Biff brings a copy of Gray's Sports Almanac back to his earlier self in 1955.

Old Biff: [about the copy of "Grey's Sports Almanac" from the future] The information in here is worth millions. And I'm giving it to you.

Young Biff: [sarcastically] That's very nice. Thank you very much. Now, why don't you make like a tree and get outta here?

Old Biff: [smacks his younger self] It's "leave", you idiot! "Make like a tree, and leave"! You sound like a damn fool when you say it wrong!

Young Biff: All right, then leave! And take your book with you!

Old Biff turns on the car radio and as they listen to the final seconds of a football game, dares Young Biff to bet a million dollars that the currently losing team will win 19 to 17. When the sports announcer calls off the final score, Young Biff is convinced.

So Young Biff starts betting heavily and makes millions as a young man. But wouldn't his "luck" run out after a while?

Several possible outcomes can occur from just a few small changes caused by Biff using the sports almanac. Here are some.

Remember that when time travel causes changes in Back to the Future, there's a "ripple" that adjusts the timeline, and it even affects people and objects that have been displaced in time - for example, Marty slowly vanishing in the first film as his history becomes rewritten, or the gravestone in Back to the Future part III showing the various individuals slated to die based on the current course of history.

So why wouldn't this affect the sports guide? As Biff changes history with his amazingly accurate bets, it's possible that some of the game results change, but then he just has to wait until his guide catches up and shows what the new result will be.

He probably did not have to keep betting on sports outcomes.

This is explained at "Biff Tannen" museum where Marty watches a clip about Biff's rise to fortune.

[Narrator] See Biff's humble beginnings, and how a trip to the racetrack on his twenty-first birthday made him a millionaire overnight.

Share in the excitement of the fabulous winning streak that earned him the name "The Luckiest Man on Earth".

Learn how Biff parlayed that winning streak into the vast empire Biffco.

Discover how in 1979 Biff successfully lobbied to legalize gambling and turned Hill Valley's dilapidated court house into a beautiful casino-hotel.

Biff birthday win was March 28th, 1958 and the picture when he is labeled the "Luckiest Man on Earth" is dated April 16th, 1959. So in about a year Biff has dominated the sports betting world, probably not enough time for the industry to react to his habits. By 1973 he had already been through three wives and finally married Lorraine. In the mean time he had started Biffco which had enough capital to build a nuclear power plant and operate a toxic waste disposal company. I would imagine this involved many investors/advisers as Biff isn't that bright. 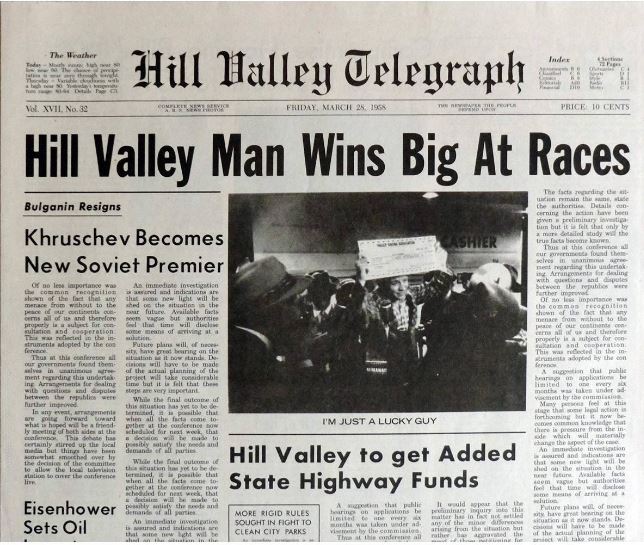 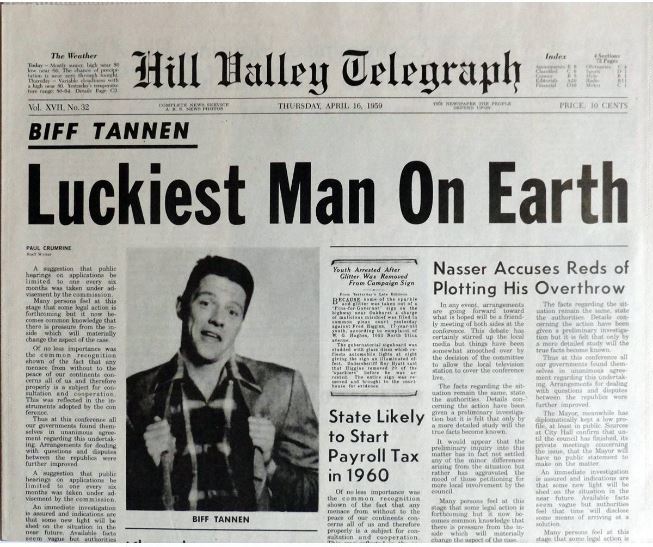 What we can say for certain is that sometime between 1959 and 1973 Biff has become one of the most wealthy people in world. To add some reasonable speculation I would say in that 15 years either 1) the sports outcomes didn't change or 2) the outcomes did change and that is what causes Biff to form Biffco with the money he already had. Finally once 1979 rolls around and he opens the casino he is set for life and doesn't need to bet on sports any longer.