Movie identification: a girl who grows up very fast

I think I watched this movie back in the late 90s, all I remember is a couple finds a baby girl in the woods and take her to their cabin. The next day the man comes home only to find the baby has grown up to a young girl. I guess the girl had blue blood.

I also remember the name "Kaya", but I don't remember whose name it is.

My first thought was The Tale of Princess Kaguya, which has a girl found in a forest by a couple, and given a similar name to what you remember. However, the release date for that was 2013 and that was a cartoon.

However, there was an earlier live-action film, Princess from the Moon with the same plotline, based on "The Tale of the Bamboo Cutter", where the character is even named Kaya. Summary from Wikipedia:

One day wood cutter Taketori-no-Miyatsuko (Toshiro Mifune) discovers a baby girl while he's out in the forest visiting his daughter's grave. Not wanting to leave the infant to die and because of her resemblance to his dead daughter, he takes the child home with him- only to discover that the child grows at an extraordinarily fast rate. Incredibly beautiful, the now grown child Kaya (Yasuko Sawaguchi) attracts the attention of everyone around her, including the land's Emperor. Unwilling to accept their advances, Kaya gives the men a list of increasingly difficult tasks. By the film's end Kaya returns to outer-space by way of a space ship. 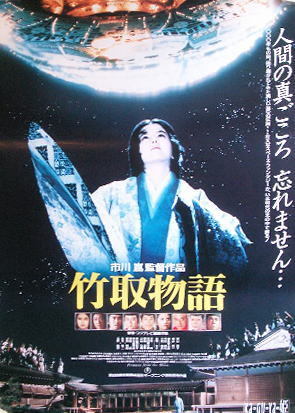 10
Movie where a girl taken to a hospital, they discover her blood is blue, neighbour old lady is an alien

11
Short story about a witch who grows huge by absorbing people
8
Movie about a mysterious girl who turns out to be an alien
6
Obscure movie from 1980s/1990s - Cartoon (maybe anime) with girl
10
Movie where a girl taken to a hospital, they discover her blood is blue, neighbour old lady is an alien
11
A dark French movie about a little girl, a big guy, and a mad scientist
4
80s-90s anime (movie or series) in which an armored girl exchanges age with a dying man on a beach
26
Old scifi movie from the 50s or 60s with men in solid red uniforms who interrogate a spy from the past