When did George Lucas compare midi-chlorians to mitochondria?

It is widely reported online that the following quote is attributed to George Lucas:

Midi-chlorians are a loose depiction of mitochondria, which are necessary components for cells to divide. They probably had something--which will come out someday--to do with the beginnings of life and how one cell decided to become two cells with a little help from this other little creature who came in, without whom life couldn't exist. And it's really a way of saying we have hundreds of little creatures who live on us, and without them, we all would die. There wouldn't be any life. They are necessary for us; we are necessary for them. Using them in the metaphor, saying society is the same way, says we all must get along with each other.

Yet I am unable to trace it back to where he said it.

I have also found several references to a 2005 Rolling Stone article that apparently has the exact quote, but the only article that I can find does not contain that quote.

The earliest I can find this quote is 2001 which many future pages link back to. It appears that it comes from an interview after the release of The Phantom Menace.

note: it will probably take someone 30 seconds to find it even though I spent 45 min looking but I am at the limit of the time (and perhaps skill?) that I can spend on this. Thank you

The article was published in E! Online on May 11, 1999 following a press conference with George Lucas and contains a more extensive quote (reproduced in its entirety below). Note that the author has transcribed midi-chlorians incorrectly, referring to them as midichondrians.

Will you ever see the movie with an audience?

I probably will at some point, but it'll be later in the summer. It's inevitable that one wants to do that, see what real people think about it.

Is there something about you that exposure in the media has changed, 60 Minutes and so forth?

Again, I've been through these hoops a lot. Whenever a movie comes out, whether it's Star Wars or Howard the Duck, I end up on a lot of covers, and I end up with a lot of media presence for a period of time--with Howard the Duck, it was about 10 minutes, with Star Wars I expect it to be about three or four months. I'm assuming by fall things will have calmed down again, and I can go back to not having this much media attention. The great thing about living in San Francisco is it's a great cosmopolitan city, but you don't have a lot of people chasing you around all the time to get autographs and things. Every once in a while somebody comes up, but it's usually a little kid. It's a sophisticated environment. It's easier to live in.

I know you're saying Saturday-morning serial for kids, but I saw in this movie you're going from classic, heroic stuff into much more specifically Judeo-Christian ideas. Can you talk a little about where you see the meaning of the Star Wars movies going?

Well, I'm confused. I've been very conscious about not making the movies religion specific. When I brought the first Star Wars movie out, it seemed most religions used it to demonstrate their own beliefs--not only Judeo-Christian but also Eastern. And in many cases, people have said they're much more Eastern than Western in nature. I'm a little curious as to why you decided this one was a little more like that.

The ideas of virgin birth, the freeing of slaves...

Did you see Spartacus?

Yes, that's Western, too. Actually the same thing has happened in China and in India, especially. The issue of Immaculate Conception is a motif that runs through all religions. It's a motif that runs through all stories about the local deity or the local hero. It's the same thing with Hercules. Most heroes are conceived in an unusual way. And in this particular case, it's actually not Immaculate Conception, it's conception by metaphor, I would say, more than anything else. I'm taking the idea of symbiotic relationships and trying to demonstrate it in a more concrete way. Midichondrians are a loose depiction of mitochondria, which are necessary components for cells to divide. They probably had something--which will come out someday--to do with the beginnings of life and how one cell decided to become two cells with a little help from this other little creature who came in, without whom life couldn't exist. And it's really a way of saying we have hundreds of little creatures who live on us, and without them, we all would die. There wouldn't be any life.They are necessary for us; we are necessary for them. Using them in the metaphor, saying society is the same way, says we all must get along with each other. The planet is the same way. We must treat the other creatures on the planet with respect, otherwise the planet will die.

The interview was also carried in the August edition of Starlog #265. Note that the quote stops with a period in the Starlog article (downloadable here) but continues with a comma and then the stuff about midi-chlorians in the article above. This wasn't a one-on-one interview but a press-conference (in which Starlog were in attendance) which would explain the difference in transcription. 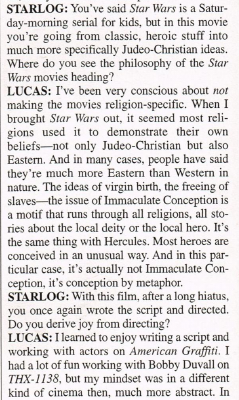 Not the answer you're looking for? Browse other questions tagged star-wars george-lucas midichlorians or ask your own question.

13
Does the fact that Yuuzhan Vong are not linked to the force contradict our knowledge of the connection of Force to life?
9
Are Midi-chlorians Ever Shown to Act Intelligently?
25
Is the relation between midi-chlorian count and Force ability a correlation or a causation? If the latter, in which direction?
20
Are Midi-chlorians able to be infused or transplanted?
4
Did George Lucas ever suggest that he was influenced or inspired by Tolkien?
21
What did George Lucas think about Spaceballs?
19
Why would Obi-Wan Kenobi say this?
12
Where do midi-chlorians go after their host dies?
5
Who had the highest midi-chlorian count before the birth of Anakin Skywalker?