I think it is eventually revealed that the wilderness is really the future. Somehow mankind has wiped itself out and life has sprung back up, taking on new evolutionary forms and reclaiming the earth. The protagonist ventures into the wilderness with some sort of expedition and encounters the altered flora and fauna.

I'm pretty fuzzy on the details. I think I read this book around 2004 or so.

This has some points in common with the 1998 alternative history novel Darwinia by Robert Charles Wilson.

Match. In March 1912, in the event some people called the "Miracle," Europe and parts of Asia and Africa, including its inhabitants, disappear suddenly overnight and are replaced with a slice of an alien Earth, a land mass of roughly equal outlines and terrain features,

I think it is eventually revealed that the wilderness is really the future.

By the end of the story, it is revealed to all the characters that it is really now the end of time

Somehow mankind has wiped itself out and life has sprung back up, taking on new evolutionary forms and reclaiming the earth.

Partial Match: "but with a strange new flora and fauna which seems to have followed a different path in evolution."

The protagonist ventures into the wilderness with some sort of expedition and encounters the altered flora and fauna.

Match. Against this background, the book describes the life and the adventures of Guilford Law, a young American photographer. As a 14-year-old boy, Guilford Law witnessed the "Miracle" as shimmering lights moving eerily across the ocean sky. As a grown man, he is determined to travel to the strange continent of Darwinia and explore its mysteries. To that end, he enlists as a photographer in the Finch expedition, which plans to travel up the river that used to be known as the Rhine and penetrate the bizarre new continent's hidden depths as far as possible

Below is a picture of the cover if that helps. 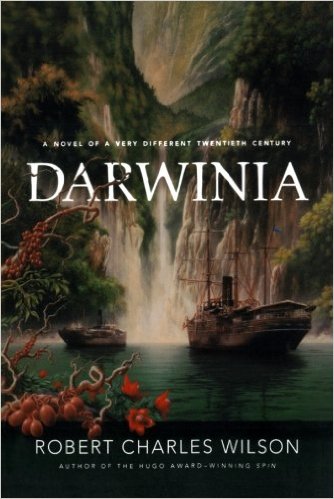 I mention it only because there's the expedition and . . .

eventually half the earth becomes a wilderness reclaimed by new life forms.

25
'Last Man in the World' short Story
10
Short story about a human entering a large alien creature, inside of which is a whole ecosystem
9
Paranormal Book about Woman who moves into California house
6
Online-chat clown crosses over to reality, commits murder
16
Sci-fi novella where colonists begin to de-evolve - Mankind has reached limits of its evolutionary cycle
9
Finding a book about a camp where Magic can be manufactured with technology
17
Novella with Humanity Surrounded in Fortress City