What was the name of the anthology with a crystal bell that brings people to life and a man who gains a "knack" for counterfeiting?

When I asked this question, I mistakenly conflated two other stories into the collection.

Based on eliminating the anthologies that I did browse at home, it might have been in a volume that included two other stories. One involved a crystal bell that could bring people back to the life in exchange for the loss of another's life (initially, the bell didn't work, but someone realized that they had the clapper on their necklace) which ended with someone falling on the bell and having a shard pierce their heart. The other about a man who somehow bought two "knacks", in his case the ability to compose rhymes at any time (and, in fact, he couldn't stop rhyming) and the ability to "make money" which translated to him doodling out perfectly detailed dollar bills whenever his thoughts drifted. Faced with legal problems from accidentally counterfeiting, and his wife becoming increasingly annoyed at the rhyming, he somehow exchanged the gift of "making money" for the gift of silence, and started working for a greeting card company. I do believe those two stories were in the same anthology, but I am not 100% certain that it was with the same one as the vampire and the blood donor.

I have since found that I wind up searching for these stories periodically, so I'm posting a self-answer for the stories in question.

The story about the crystal bell is "The Rose-Crystal Bell" by Robert Arthur. Summary from here:

A woman finds a bell in an antique shop and the owner of the shop tells her it is cursed. When the bell is rung, it can bring a dead person back to life, but someone else must die in their place. Her husband is a doctor and they have a son together. In the middle of the night, the woman receives the terrible news that her her son has been killed in a horrible car accident. She rushes down to the hospital and rings the bell. Her son comes out and greets her, telling her that there was some kind of misunderstanding because he had been in a different car and wasn’t killed in the accident. She drops the bell in shock and it shatters into pieces, but according to the legend about the bell, someone else still needs to die.

The story about the man with a knack for counterfeiting is "Mr. Milton's Gift", also by Robert Arthur. Summary from here:

Homer's troubles began when he walked into the strangest little gift shop he'd ever seen. All he had wanted was a gift for his wife, but the odd little proprietor with the glowing yellow eyes had sold him quite a different sort of gift...the gift of verse. Now, no matter what Homer said, it came out in rhyme and he couldn't stop it!

I read them both in a collection named Ghosts and More Ghosts and contained the following stories, all by Robert Arthur: 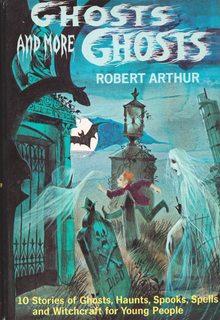 12
Short story about a man donating a rare blood type who learns that the donation is for a vampire
11
Searching for a book of short stories: blind man hears a monster 'shuffle, shuffle, click, click' who is tracking a man that opened Egyptian tomb

8
What was the name of this anthology TV series from the eighties?
5
Searching for short story in 70s anthology that was post apocalyptic. Character's name is Saura
12
Short story about a man donating a rare blood type who learns that the donation is for a vampire
8
Sci-fi book with a human colony planet that brings the dead back to life
11
What was that movie with the man with the robot arm?
8
Looking for the name of a scifi/horror anthology with B&W illustrations
20
Story with people called "lobsters" who are welded into spacesuits for life?