What is the nature of the experiments that the Vok has on the prehistoric Earth?

In the Beast Wars series, what is the nature of the experiments that the Vok has on the prehistoric Earth?

Rattrap speculates the function of the flying island the Vok has built is, in fact, a test of the survival capabilities of whoever visits it.

However, as said by the alien race, the war between Predacon and Maximal has contaminated their experiments by destroying the flying island and the dangers the destruction caused are "bigger than you know". What is he implying? 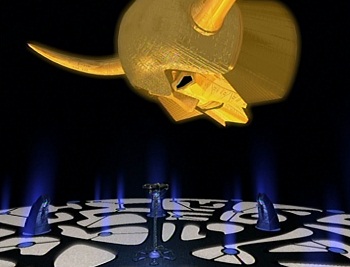 To make a better humanity.

Beast Wars Universe (2000) contains detailed background information — supplied by Larry DiTillio, one of the two story editors for Beast Wars: Transformers — regarding the Vok and their experiment:

The purpose of the Vok's experiment was to create a more perfect humanity on Earth. Ever since Prime gave them a conscience and transformed them into the Vok, they have tried to rebuild all the intelligent lifeforms that they had destroyed up until that point. In the case of Earth, they attempted to recreate humanity by going back in time and leading the primitive humans into a unified whole rather than warring tribes. One of the things that they did was to put pure Energon crystals in the depths of the Earth. These would eventually mature into Energon cubes. The Vok planned for this clean energy source to replace fossil fuels, atomic energy and other energy sources that had the risk of pollution, and when humanity had sufficiently advanced, they planned to tell them of the existence of Energon and how to use it, thus speeding up the advance of high technology as well as the development of humanity.

Another method that was used was religion. The Vok realized that humanity had an instinctive need for a higher power. In other words, humans need gods. The Vok planned to play the role of God until humans freed themselves from their dependency on gods. The flying island [Brigadoon] is an Olympia or shrine created for that purpose. There were several of these set up around the planet, and at these shrines, humanity was to learn from the Vok and be guided in their development until they could go into space on their own.

By interfering with the experiment — and by preventing the sterilization of Earth that would have reset the project — the Predacons and Maximals ensured that a violent and ecologically destructive version of humanity would arise.

Not the answer you're looking for? Browse other questions tagged transformers beast-wars or ask your own question.

13
If Optimus and Megatron came to Earth 4 million years ago, why are the Transformers' robots forms so humanoid?
8
What is the Natural Lifespan of Transformers?
17
What is the difference between an Autobot and a Decepticon
4
What happens to cybertron after the events of the Dark of the Moon?
8
What was the first robot in disguise?
5
What is supposed to happen on “The Day when All are One”?
1
What is the timeline for G1 Transformers?
2
Why didn't the Earth forces stop the Decepticons?