What is this monument in the intro of Stargate SG-1 Season 4?

I always wondered what the Monument in the intro of Season4/5 in Stargate SG-1 is: 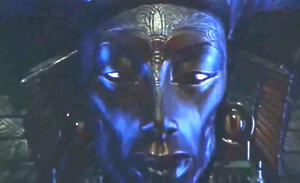 To me, it looks like the Sphinx, but the hat is too big/high.

This is not a monument at all, but rather Ra's Mask. 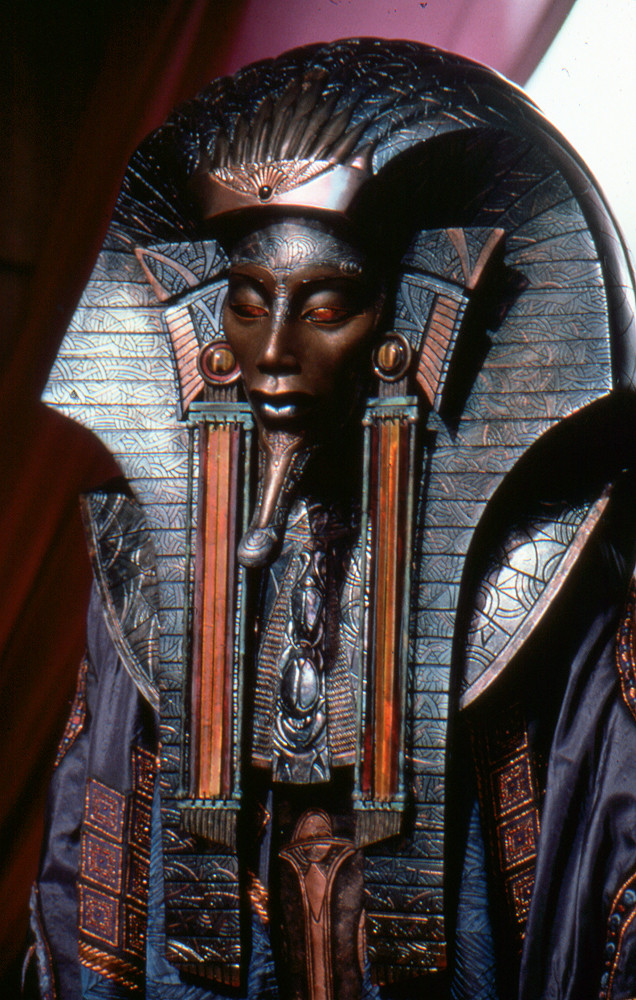 It was actually in the intro for all the first five seasons, intended to be a visual tie-in to the movie, where Ra has a similar mask.

When it moved to Sci-Fi a new intro was made, including for early seasons. This Reddit post explains why some seasons kept the original opening:

The first five seasons, with Showtime, all used the Ra's mask intro when they originally aired. When SciFi picked up the series for season 6, they created a new intro, and also went back and made a new intro for the older seasons, the action-packed intro we all know and love.

However, since they changed from 16mm to 32mm film from the season 3 finale onwards, it created a weird situation where the new intro, meant for use in syndication, wasn't compatible with the DVD mastering process for some reason. So the DVDs (at least the first editions, not sure about the later ones) start off with the action-packed intro, then switch to the Ra's mask intro abruptly from the season 3 finale until the end of season 5.

Hope that helps. It's a source of some confusion, since some episodes might have a different intro depending on whether you saw them in syndication, or DVD/original airing.

Strictly speaking it's the Pharaoh Akhenaten

Starpilotsix gave a great answer but it might be worth noting that Ra's mask from the movie is the literal spitting image of the actual Egyptian Pharaoh Akhenaten.

This actually ties into the movie pretty well in that the real life figure was said to be somewhat androgenous just like the actor cast as Ra though it's believed to be a result of the fact the Pharaoh was the product of intensive inbreeding which probably explains why his depictions all look a bit like Jar Jar Binks.

From a sociological/political standpoint the comparison is interesting too because the real life Pharaoh was deeply unpopular after he tried to make himself the head of a monotheistic faith rather than a member of the Egyptian Pantheon. While Goa'uld aren't usually in the habit of declaring their rivals false gods it's mentioned that Ra told the Abydosians that he was their lone single deity much as the historical figure did on Earth.

IRL he was succeeded by his son Tut who died young (possibly murdered) at which point succeeding Pharaohs struck almost all record of both Tut and his Father Akhenaten. Seems a large part of the Egyptian economy was based on all the various temples Akhenaten had closed and a whole lot of people wanted to forget him and his changes as soon as they could.

We can imagine Akhenaten would inspire the same reaction if indeed he was an alien who abruptly abandoned his human followers as Ra did.

Not the answer you're looking for? Browse other questions tagged stargate stargate-sg1 object-identification or ask your own question.

18
What was missing that kept Stargate Command from making their own Stargates?
10
Why Does the Stargate Event Horizon Look Like Water?
9
Changes in the Constellations shape over time Vs Stargate Glyphs
9
Why did the Stargate close on John Shepherd and Ronon on Season 2 Ep 18 "Michael"
14
Could radar penetrate the Stargate aperture?
11
What is hyperspace in Stargate like?
11
What happens to civilians who leave the Stargate program?
15
What are the different terms used to describe a Stargate?
5
Which Stargate address is shown on the Stargate plans?