Does Donkey even have a real name at all?

Does Donkey introduce himself as "Donkey", or does Shrek start calling him that because he is a donkey and everyone just rolls with it? Does Donkey even have a real name at all?

Donkey's name is Donkey. He introduces himself as such.

Donkey: All right, that's what I like to hear, man. Shrek and Donkey, two stalwart friends, off on a whirlwind big-city adventure. I love it!

And in the film's official novelisation, we have proof-positive that he's called Donkey by his owner.

There were two villagers with elves, an old man with a wooden puppet of a boy, an old woman with a donkey she called Donkey, a boy with a glowing fairy in a cage, and a burly peasant with three little pigs under his arms.

Note that Shrek only refers to him as "little donkey" (The script shows this is without caps) until they get to the bridge.

and this is how Donkey is introduced in the script 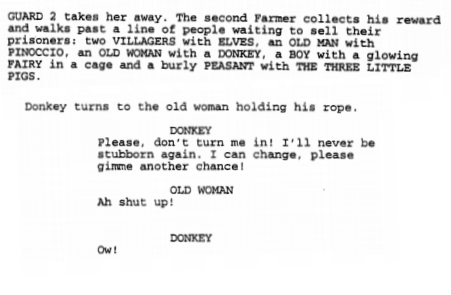 Not the answer you're looking for? Browse other questions tagged shrek or ask your own question.

23
Why does Shrek pause before he says his name?
3
How does Shrek's rescue party reach him so fast at the end of Shrek 2?
9
Are all donkeys colorblind in Shrek?
12
Why wasn't Donkey afraid of Shrek?
28
Was King Harold born a human or a frog?
2
Is the Puppet Master's name Stromboli in Shrek the Third?
5
Why does Puss in Boots have a new girlfriend “Dulcinea” in the 2015 TV show?