Why don't we see more people equipped with Pip-Boys in the Fallout world?

In every game of the Fallout franchise, the player is equipped with a Pip-Boy. This is a device that is given to maybe every Vault inhabitant.

In Fallout: New Vegas, Doc Mitchell gives the Courier a Pip-Boy had when he was living in Vault 21. We know that in Vault 21:

everyone in the vault was equal, it was created with a perfectly symmetrical layout, and the dwellers settled their differences via games of chance. Reliance on luck to solve problems created what might be considered the perfect realization of anarchy: a society in which everyone is equal and no one has an advantage over the others.

So we could consider that every inhabitant of Vault 21 had a Pip-Boy.

We know that at the age of ten, every inhabitant receives his Pip-Boy, as in Fallout 3, the Lone Wanderer receives one, on his tenth birthday, from the overseer Alphonse Almodovar. 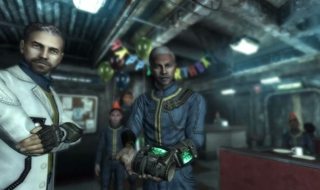 There must have been a few thousands of Pip-Boys spread around the U.S.A. and being a valuable item, we could expect to occasionally meet strong characters, influent people or big bosses wearing one.

So where are all these Pip-Boys and why don't we meet, from time to time, NPCs wearing one?

I'm unable to find my transcript of Fallout 3 dialog, but when you get your Pip-Boy, it's stated (or at least heavily implied) that every vault dweller gets a Pip-Boy. If you talk to the resident vault handyman, however, you're treated to a grumble about how impossible it is to find spare parts, that your Pip-Boy is an older model, but how he worked extra hard to make sure it was repaired and ready to go.

By the time of the games, Pip-Boys are 200+ years old... and nobody is making spare parts.

Rob-co built the Pip-boys for Vault-Tec under contract; X Pip-boys and X^Y spare parts distributed to the vaults. They were never really shown in the games to be a popular consumer item, unlike Mr. Handy's. In fact, dialog highly implies that only vaults really had supplies.

There were only 122 vaults, and they were designed to hold 1,000 people each. However, not all those vaults were ever expected to fill to capacity, and considering how much Vault-Tec skimped on spending money wherever they could, I wouldn't expect a vault with one guy and some puppets to have more than one Pip-boy around.

Combine that with the fact that there were at least two mutually exclusive sets of Pip-Boys (2000s and 3000s), plus at least one major upgrade, the ability for parts to be interchangeable between the coasts goes way, way down.

Luckily, Pip-boys appear to be analog computers; this means you've got more options available to "hotwire" a fix if you need it, and there are vacuum tubes placed all around the world, but if one of the tube "chips" were to go out, you'd be screwed.

After the war, Pip-boys were premium commodities only really useful for adventurers.

Think about the functions on a Pip-boy. Unless you're hauling around 200lb of gear, or actually expecting to navigate freely across the wasteland, or need non-stop medical feedback, or actually require constant sweeping for radiation, or constantly getting into high level fights where you need VATS, a Pip-boy is really unnecessary. Caravans have brahmin to do their carrying, most caravans follow pre-blazed trails and don't need GPS, doctors are available at most stops to handle anything first-aid can't handle, their trails have already been blazed around radiation hot spots, and you can get around the lack of individual marksmanship by ganging up into groups.

Doc Mitchell specifically gives you his Pip-boy because it'd be more useful to you than it is to him.

He's a doctor, living in a house in a town serviced by caravans. He doesn't need the features of a Pip-boy. Spread that out to all the surviving members of society, and you can see that a Pip-boy might end up more of a white elephant than a benefit to most people, requiring specialist parts that can only be found by delving into vaults full of extreme dangers, or requiring tons of caps to buy from specialty merchants. There's a reason why the only Pip-boy you could theoretically buy is the Pimp-boy 3000, and even that's so "expensive" you only get it as part of a questline.

Not the answer you're looking for? Browse other questions tagged fallout or ask your own question.