Can Maul use Force Lightning?

Maul (formerly Darth, now just Maul) was once a Dark Lord of the Sith, apprenticed to Darth Sidious. He was trained in the ways of the dark side since childhood, many years before Sidious discovered the existence of Anakin Skywalker. As such, it feels reasonable to believe Sidious genuinely intended to train Maul to be his future successor - at least up until Anakin came into the picture - rather than being a mere placeholder like Tyranus was.

Unlike in Legends, the canon Sidious was loyal to the Rule of Two, so there is no reason to believe he would hold back on teaching Maul everything he knew either.

However, after losing his legs and having them replaced with metal ones, he is not much different from Anakin in some ways. Force Lightning was debilitating but not immediately lethal. What sets him apart from Vader, however, is that he had no life support systems to be fried by Lightning - the reason Vader couldn't learn to use it.

So, it comes down to this: did Sidious teach Maul to use Force Lightning at all? If he did, can Maul still use it? It may not kill himself since he's not like Vader but it can still be more of a liability than an asset nonetheless in most cases.

It's useful to have an ace in the hole.

This dialog can be found in Witches of the Mist, an episode of Star Wars: The Clone Wars, between Savage Oppress and Count Dooku:

Savage: How does one defend against such power?

Dooku: A wise master does not reveal all his secrets at once. In due time, my apprentice.

In the "Rule of Two" style system, it's very useful for a Sith Master to have techniques available to them which are not available to one's apprentice; Sith Holocrons are available to teach any techniques one's Master neglects during one's training. Considering the sheer power produced by Force Lightning, it's probably safe to bet that Masters hold out on their apprentices. "Shorting out Vader's life support" was just a convenient excuse.

In Legends, it's implied that Force Lightning is one of those skills that require complete mastery of the Force, a willingness to bend the fabric of the universe to your will, and only the most powerful force users would be able to use it (and usually only the Sith would dare) (Darth Plagueis). If you're willing to accept this, it's additional support as to why Maul didn't use it; he was powerful, but not Palpatine Powerful. 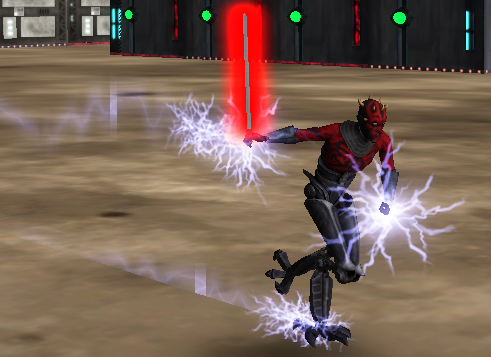 However, none of these appearances have particularly strong canonicity. Given that he never uses it in any of his regular appearances, the answer seems to be no.

I'd suggest that if he was taught he would have used it in one of the many battles we have seen him in.

At the very least it would have been quite handy while trying to fight two Jedi while he still had his legs.

It may not be that he was unable. Being physically more powerful than Sidious, it is possible that Sidious needed to keep a trick in the bag in case (when) he turned on his master.

Not the answer you're looking for? Browse other questions tagged star-wars the-force sith darth-maul or ask your own question.

32
How powerful was Darth Maul?
1
What information about Darth Plagueis do we have in canon?

27
Why did Jedi in the prequel movies use the Force offensively?
117
Is the Dark Side of the Force more powerful?
5
Can you "Force Choke" yourself to death?
8
Can a Sith/Jedi use the force to physically keep someone alive?
8
Is it always necessary for the Sith to commit murder?
2
Why didn't Obi-Wan incapacitate Darth Maul?
10
Did Yoda (and other Jedi) have any lethal Force abilities?
4
Can all Jedi/Sith learn the same Force powers?