Why were New Paradigm “British Robots” featured in The LEGO Batman Movie?

These Doctor Who-themed LEGO Dimensions and LEGO Ideas sets both feature variants of the standard Dalek. 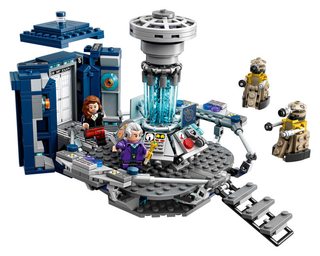 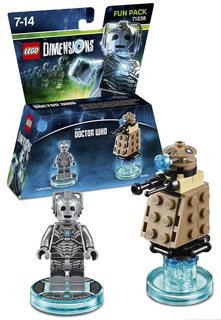 However, in The LEGO Batman Movie, we exclusively see the New Paradigm Daleks:

As discussed on this site were not well-received and were intended to be forgotten about: What happened to the multi-coloured Paradigm Daleks?

There was some discussion on licensing and rights in comments on another question, and I've wondered if that has anything to do with this. These LEGO Daleks also never actually referred as anything other than "British robots" on-screen, something else that (along with the color) stood out to me as odd while viewing the film.

So, what gives? Is there a legal reason for their appearance? Or was their color scheme just better suited for a LEGO world? Has anyone involved made any comments?

If you're still interested in why the Daleks weren't referenced as such you might want to read this article. I've been wondering myself and found this... http://www.cbr.com/director-explains-lego-batman-movie-easter-eggs-secrets/

“The BBC said we could use the Daleks, and we could’ve called them the Daleks,” he said, explaining that the scripted version of the scene – in which Joker introduces special guest villains like Sauron, the Kraken, and Lord Voldemort – featured the Clown Prince of Crime introducing the Doctor’s major adversary in a quippy way.

However, when actor Zack Galifianakis recorded the lines, one of his takes featured a joke in which “he says all the names, and he mispronounced Sauron and Voldemort, and then he said ‘British robots.’” To McKay, a fan of “Doctor Who,” the “point of view that [the Joker] didn’t understand who the Daleks were” struck him as funnier than original line.

"...But it’s still not something everybody knows, so I thought [Joker saying] ‘It’s British robots, ask your nerd friends,’ was just a great joke.”

Concerning the choice of design they made: no idea why they did that. But it's a good theory that it's mainly because they're so colourful. Maybe it's also a thing that ties this in with the DW universe as we haven't seen the paradigm Daleks after "Victory of the Daleks". Someone in the writers' room or design department might have been a hardcore Whovian and used them to deliver an answer on why they were absent from the show.

15
What happened to the multi-coloured Paradigm Daleks?
12
In The LEGO Batman Movie, who are the agent looking villains?