Does Voldemort have the sense of smell?

Voldemort doesn't have much of a nose.

Would he still be able to smell with what he has left? Assuming his sense of smell is impaired, to what extent was it be stunted?

Voldemort's nostrils seem to be of variable visibility, but they are generally present. One might imagine that, when they aren't as visible, it's because he doesn't have them flared, so they blend in. 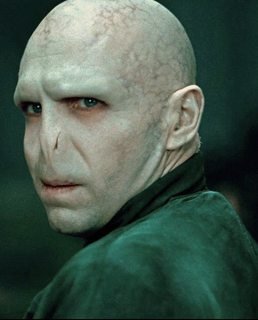 As for whether a person can smell things without a nose, the experts say that they will be able to, but their ability to breath will be impaired.

Likewise, the nose funnels air (and smells) toward receptor neurons, * which sit behind the face and near the front of the brain. You can't really damage this odor-sensing area by slicing off cartilage. More likely, cutting off someone's nose will affect their breathing, which in turn affects their ability to smell. The front of the nose has two main functions: It guides airflow and filters out dust and other large particles. The nostrils direct incoming breaths up and over turbinates located behind the nose. These turbinates secrete moisture to humidify the air before it reaches the receptors. At the same time, particles get stuck in nasal mucus before dripping or getting sneezed out. Without a nose, you'd end up inhaling more dry, dusty air...

The article in question is specifically addressing a real-world case where Taliban guerrillas sliced off the noses and ears of drivers suspected of colluding with the enemy. In a body shaped by magic, Voldemort might still have working turbinates within his face, which would mean that he might have no problem at all.

The answer seems to be "Very well, thank you!"1

You say Voldemort doesn't have much of a nose, but he clearly does have functioning nostrils:

The thin man stepped out of the cauldron, staring at Harry . . . and Harry stared back into the face that had haunted his nightmares for three years. Whiter than a skull, with wide, livid scarlet eyes and a nose that was flat as a snake’s with slits for nostrils . . .

He can clearly inhale with his nostrils, and widen them when needed, like an ordinary person:

He put back his terrible face and sniffed, his slit-like nostrils widening.

“I smell guilt,” he said. “There is a stench of guilt upon the air.”

His nostrils also respond to emotions, as with ordinary people:

“A little break,” said Voldemort, the slit-like nostrils dilating with excitement, “a little pause . . . That hurt, didn't it, Harry? You don’t want me to do that again, do you?”

Overall, there is no evidence to suggest that his "lack" of nose prevented him from perceiving smells. The changes that happened to him due to horcruxes (the slit-nostrils, the red snake-like eyes) seem to be purely cosmetic, and not influence his capabilities.

22
Does Data smell?
10
How is The Doctor seen by his people?
3
Does Nearly-Headless Nick have a sense of smell?

22
Why Didn't People Think That Voldemort Died After His Attack on Baby Harry?
22
Why didn't Voldemort go after Professor Trelawney?
17
What effect would a Dementor have on Lord Voldemort?
15
Would Voldemort have been recognisable to the average wizard?
10
What exactly would the Aurors have done with spirit-Voldemort?
15
Did anybody ever try to talk sense into Voldemort?
9
Why did Voldemort have to die?