What happened to Drusilla that made her so weak?

In the first half of season 2 of Buffy the Vampire Slayer, Drusilla is quite weak. She is unable to hunt on her own, often bedridden, and Spike is constantly worrying over her. Her illness is apparently so severe that a magical ritual involving her sire is required to cure her. Do we know what caused this illness?

There is some mention of a mob in Prague that attacks Spike and Dru but I don't recall ever hearing what exactly they did to Dru. Vampires are able to recover from physical damage, so I would assume whatever happened to Dru had a mystical component to it.

I would prefer an answer from the Buffy or Angel tv series or from the Dark Horse Comics continuation but if an answer cannot be found there, I will accept answers that come from other extended works.

Drusilla was tortured by a Vampire Hunter

In The Dark Horse comic story The Problem with Vampires by Drew Goddard (one of the stories found in Tales of the Vampires, Part One) an Inquisitor captures and tortures Drusilla, following the attack on her and Spike in Prague, on a special chair built to torture vampires. This chair may have properties that lead to the long-lasting effects felt by Drusilla. He wants her to feel the pain he is inflicting on her forever. 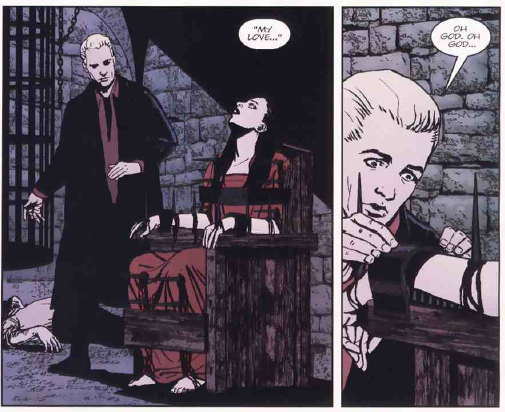 During the torture Spike is staked to the floor by the mob, trapped but not killed. He eventually frees himself and rescues Drusilla before taking her to the Hellmouth to recover.

20
Why can't Buffy's mother know that her daughter is the slayer?