Was Mad-Eye Moody's Recumbent Broom a Help or Hindrance In the Battle of the Seven Potters? 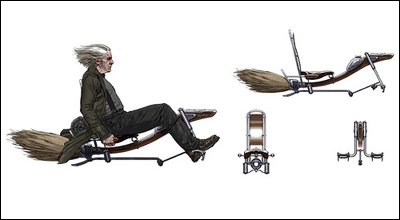 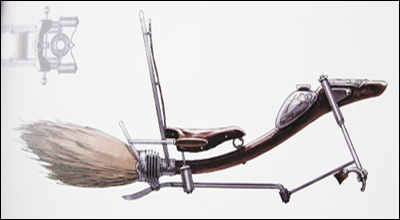 Would the shape, mechanics, or aerodynamics of Mad-Eye Moody's recumbent broom help or hinder him in combat?

In the Battle of the Seven Potters in the movie Deathly Hallows Part I, Moody is shown riding a recumbent broom with a seat and handles on each side. It seems to me that this kind of broom isn't conducive to a battle situation.

When I imagine both a recumbent broom and a regular broom, I continue to think of the regular-style broom as more efficient, easier to turn and handle in a split second, and more geared toward flying in a high-stress combat situation (holding onto the broom handle with one hand and pointing one's wand forward to cast spells with the other).

If Moody were to have let go of one of the side handles of his broom to use his wand, would that have caused this kind of broom to tilt dangerously? Now I know that Moody was killed by Avada Kedavra before falling from his broom, so the broom didn't cause his death. But could it have caused his reflexes to be just a tad bit slower?

With a more traditional prone broom, the wand hand remains much closer to eye level, particularly when the rider is leaning forward for increased speed and maneuverability (not to mention the benefit the decreased profile gives in terms of making for a smaller, more difficult to hit target). The position of the wand would give much faster, and more accurate reactions, simply because the wand has much less distance to travel to be "ready". 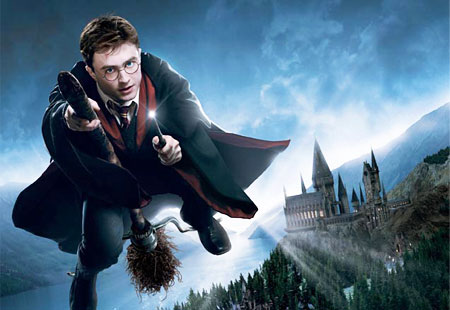 However, there are two advantages to the recumbent position, one of which is relatively minor, with the other providing significantly more value.

The minor benefit is for those who do not spend much time on a broom. Casting spells while prone would likely take quite a bit of practice to get accustomed to. The body position on Moody's broom is much more akin to a natural walking position, so would present much less of a learning curve, and would therefor offer less of a combat disadvantage for a rider who was relatively inexperienced than the traditional prone setup.

More importantly, though (particularly in Moody's case), a recumbent setup provides much greater visibility and situational awareness to the rider. Given Moody's role as the leader, as well as the additional benefits his magical eye bestowed upon him, a clear view of the battlefield would have been of surpassing importance to him. While the eye does provide 360 degree visibility, a recumbent orientation may have been more natural for him, and he may have feared that a prone perspective may have reduced his reaction time.

Finally, we must recall that Moody was physically disabled, and had a prosthetic leg. This would likely have made it almost impossible for him to fly in a traditional prone position.

The art has it resembling a motorcycle - it could very well have been a Rule of Cool situation. With the handles and stirrups, along with the high back, it is probably more stable as well compared to standard broom positioning.

As far as general use goes, though, from a physics point of view it probably was a hideous liability - there is no holding your body close to the broom for maximum aerodynamics, and normal sitting position would probably have a great deal of drag.

As a relatively experienced motorcyclist, I would say the comfort,confidence,and experience of the rider with whatever style is preferred, would be the most important single factor.

I'm not an equestrian, but AFAIK having a saddle and stirrups improves yoru ability to shoot from the horseback (feel free to double check that on History.SE). This broom is likely to be the wizarding equivalent.

12
Is it possible to modify flying brooms?