Does Jack from Jack and the Beanstalk ever appear in OuaT?

The television series Once upon a Time has incorporated fairy tale characters including Snow White, Red Riding Hood and Rumpelstiltskin- has the title character of Jack and the Beanstalk ever made an appearance on the show?

Yes, but with the inevitable Once Upon a Time twist

In the Once Upon A Time version of the story, the character of Jack is switched for a woman named Jacqueline who calls herself Jack for short. She is portrayed by Cassidy Freeman. 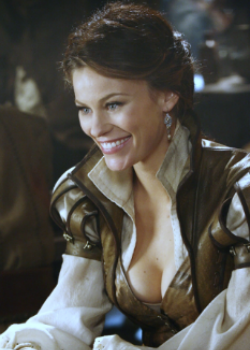 Her story is told in the episode "Tiny" (season 2, episode 13). Spoilers for her story below.

She and Prince James befriend Anton the giant, but betray him by trying to steal all of the magic beans. However, she is stabbed by Arlo the giant and James leaves her to die. Emma finds her remains in an earlier season 2 episode "Tallahassee."

16
What's with Rumpelstiltskin/Mr. Gold's obsession with kids?
13
Who are the random extras in Once Upon a Time?
4
So, is Mary Margaret a nun or not?
4
Why are Snow and Charming the central characters?
17
What is the definition of true love?
6
Do Elsa and the snow queen never change clothes?
2
Is “In Wonderland” a new series or does it contain story-relevant plots from the main series?
3
Who cast the latest protection spell around Storybrooke?
6
How did people leave Storybrooke in the Season 5 Finale?
8
Why has the theme song from Once Upon A Time been removed from Netflix and replaced with a 5-second title card?