What is the bird-like creature on the Two Towers J.R.R. cover? 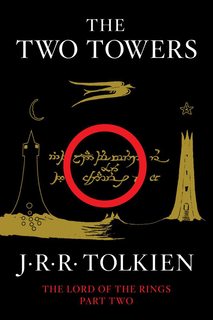 I think it is an eagle but I cannot find any information on it.

This cover design is taken from one of Tolkien's own suggested covers for the book, proposed (but rejected) for the original printing: 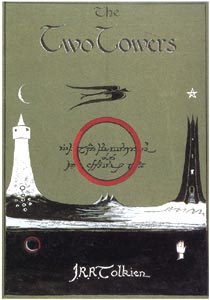 I don't know if Tolkien himself commented on this, but the most reputable critical sources agree that it's a Nazgûl:

1 This refers to the first image posted in this answer

It was one of the Nazgûl, as stated in Chapter 11 of Book 3, The Palantir. Although the creature itself (as mentioned by @vsz in the comments) is one of the fell beasts, or hell hawks1, ridden by the Nazgûl after the events at the Fords of Bruinen.

At that moment a shadow fell over them. The bright moonlight seemed to be suddenly cut off. Several of the Riders cried out, and crouched, holding their arms above their heads, as if to ward off a blow from above: a blind fear and a deadly cold fell on them. Cowering they looked up. Avast [sic] winged shape passed over the moon like a black cloud. It wheeled and went north, flying at a speed greater than any wind of Middle-earth.

Nazgûl!’ he cried. ‘The messenger of Mordor. The storm is coming. The Nazgûl have crossed the River! Ride, ride! Wait not for the dawn! Let not the swift wait for the slow! Ride!
The Lord of the Rings: The Two Towers - Chapter 11, The Palantir

The Nazgûl was flying towards Orthanc from Minas Morgul.

From the Interactive Map on LotR Project we can see that on the 5th of March, when they were camping at Dol Baran, and the Nazgûl "wheeled north" towards Orthanc 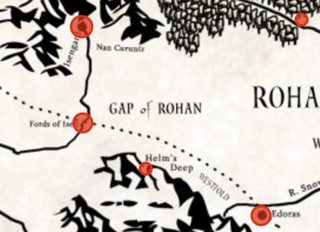 A few quotes to support the above are found in the Two Towers and the Tale of Years.

Winged Nazgûl passes over the camp at Dol Baran.
The Lord of the Rings: The Return of the King - Appendix B, The Two Towers

Less than an hour had passed, and they had reached the Fords of Isen and crossed them. The Mound of the Riders and its cold spears lay grey behind them.

Credits to @MartinSmith for the naming of the creature.

The other answers state that this is a Nazgûl (AKA Ringwraith, Black Rider, Dark Rider)

It seems there isn't a canonical name for the creatures the Nazgûl flew on.

After losing their horses at the Ford of Bruinen, the Nazgûl returned to Mordor and reappeared mounted on hideous flying beasts; Beregond called them "Hell Hawks". Tolkien describes them as "fell beasts", though Tolkien applies the adjective fell ("fierce, cruel") to a variety of other creatures throughout The Lord of the Rings — even at one point to Gandalf. In a letter, he calls the winged mounts "Nazgûl-birds". In the absence of a proper name, derivative works sometimes press "fellbeast" or "fell-beast" into service.

The LOTR wiki also discusses this in its article on Fellbeast

There is a common misconception that these creatures are called Nazgûl, probably due to the fact that the unit in many video games (combined Fell beast and Ringwraith) was called a Nazgûl...

24
What is the creature that the Nazgul ride called?