I watched this show some ~7 years ago - I remember it aired approximately the same time as Smallville, so let's say 2000s to be sure - in Russia (but the series certainly wasn't Russian-made). It seemed fairly recent (at that time).

The main "feature" of the show was a circular stone built in a wall. Two teens (boy and girl) from different cities (possibly even different countries) discover that turning, or otherwise manipulating the stone could be used to open a portal to another city - in fact, this is how they meet, if memory serves.

Throughout the series the stone appears to be limited and malfunctions regularly - at some point the insert something like a knife between the stone and the wall to make it work.

There was a book somehow connected to the stone - a sort of manual. They couldn't use it because it was damaged for some reason, so they give it to a friend, who claims he has some expertise in binding/restoring books after attending some workshop.

At the end of the series this friend finishes restoring the book, and uses the portal to go somewhere, leaving a note along the lines of

I know your secret now. The stone and portal are somehow connected to meteors.

The show didn't seem overtly juvenile-oriented, though being a child myself at that time, I'm probably remembering this wrong :). I feel like this is a fairly popular and famous show, but googling related terms only yields irrelevant stuff.

You may be talking about Foreign Exchangen(2004)

This show follows the adventures of two children: Brett Miller from Australia and Hannah O'Flaherty from Ireland. They discover a portal which enables them to travel between each country and experience life in different hemispheres, as well as having adventures along the way.

Here are the main characters in front of the stone portal: 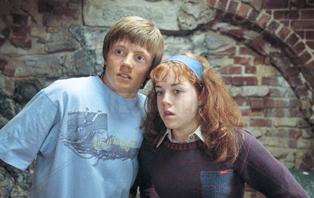 20
I'm looking for a book series about a Queen that time travels to save her people
5
Need help identifying the fantasy book about a portal to a fantasy land in the basement of a house
4
TV show with aliens living in a small stone?
14
Old (1950s? maybe 1960s) space adventure for boys anthology
4
Fantasy show where a kid uses crystals to summon creatures
18
A TV show involving brains being sucked out and launched into space