What is the symbol on the pauldron of the storm troopers who guard Grand Admiral Thrawn's office?

In Star Wars Rebels Season 3 Episode 17 ("Through Imperial Eyes"), the stormtroopers that guard Grand Admiral Thrawn's office on his Star Destroyer have a black pauldron on their right shoulder with a white symbol on it. It is also seen on the uniform of a few of his officers. 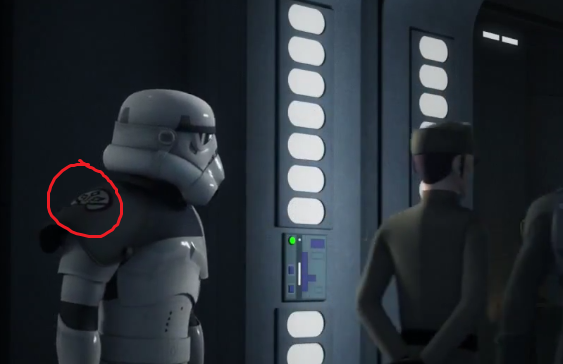 What is it, what does it represent and why do only Thrawn's troopers wear it?

It's a stylized Chimaera, which is the name of Thrawn's ship.

As a Grand Admiral, Thrawn was allowed to "brand himself," and as such his ship, stormtroopers, and some of his officers wore the symbol of a Chimaera.

The question was put to Lucasfilm Story Group leader Pablo Hidalgo in a recent episode of Rebels Recon:

ANDI GUTIERREZ: I’ve got a question from Joshua Parish. He asks "Do the insignias Thrawn’s stormtroopers have on their pauldrons and uniforms have any significance?

PABLO HIDALGO: They do. They are a stylized depiction of a chimera. Basically a three-headed monster. So that’s what those prongs represent. Basically anyone in Thrawn’s forces has the ability to wear that emblem.

GUTIERREZ: So, Jake Anderson asks, “What was the artwork I spotted under Thrawn’s Star Destroyer in Warhead? Does it have any meaning?”

HIDALGO: Uh…let me think about—yes! It is the Chimera; that’s the name of Thrawn’s ship, and so on the belly of the ship he’s got a stylized version of that creature.

That is the symbol of the 7th Fleet, a fleet under the command of Grand Admiral Thrawn. The symbol there is to show loyalty to Thrawn and also to signify the fact that the trooper is conjoined with the 7th Fleet.

119
Do the Imperials know they are evil?
17
Are old order stormtrooper helmets more sight restrictive than clone helmets?
27
Do we ever see regular (non-stormtrooper) ground troops?
59
In Star Wars: A New Hope, why was one officer dressed in white?
42
Did Captain Needa die in The Empire Strikes Back?
50
Is there a reason given in-universe for Orson Krennic's outfit beyond pure ostentation?
2
How long after the defeat of Nightswan does the final chapter of “Thrawn” take place?
12
Does Solo serve as a Stormtrooper?
24
Is there anything wrong with Thrawn?