They ARE Klingons, and it's a long story... What's the story?

I just watched the episode of Star Trek DS9 Trials and Tribble-ations where the Defiant is taken back in time to the events of ‘The Trouble with Tribbles’ episode from Star Trek TOS. Those who remember the TOS Klingons know that they they don't look anything like Klingons as we now know them. 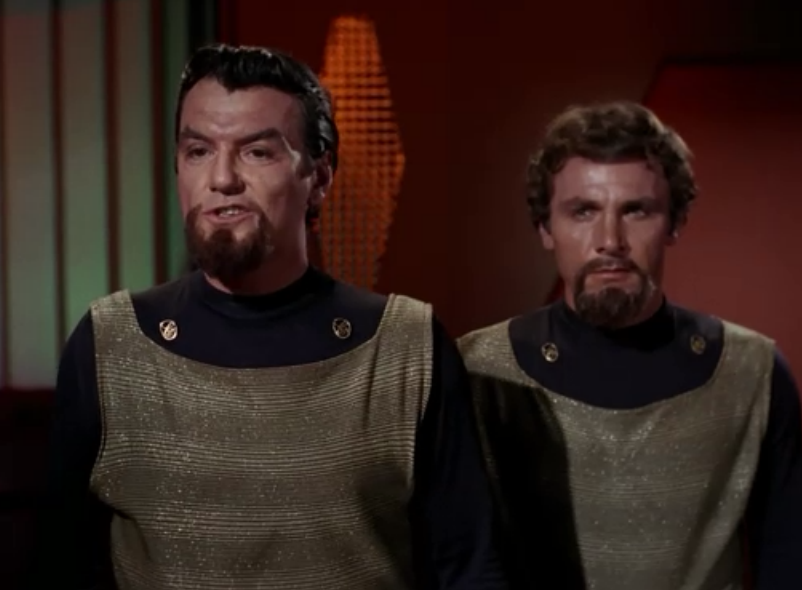 When they're pointed out to Bashir and Odo as Klingons, they look on in disbelief, then all heads turn to Worf for an explanation:

Worf says that they are Klingons, but that it's a long story, and it isn't discussed with outsiders.

What's the story? Why do these 23rd century Klingons look like humans?

IN-Universe - As Worf said, it's something not discussed with non-Klingons.

OUT of Universe - To summarize, it's a very meta in-joke.

In the original series, they had a limited budget, and makeup options were few. So the Klingons got goatees and dusky skin, and belt buckles made of bubble wrap.

When they made Star Trek: The Motion Picture, Roddenberry had the budget to give the Klingons the more alien look he maintained he wanted to give them all along.

But the fans went to great lengths to try to come up with an in-universe explanation for the change. Both the possible explanations given in that scene were examples of those fan theories.

So when this episode came along, when we finally got to see "new" and "Classic" Klingons, there was much hope that an official reason would be given. So for Worf to then basically say "it's a secret" was a perfect response to that desire.

There was much screaming and shaking of fists.

This apparent discrepancy was explained in Star Trek Enterprise. Long story short, Klingons experimented with genetic mutation to make themselves stronger, much like what was accomplished with Kahn and the Augments, but there were side effects that made the Klingons look "hoo-mahn". These side effects were spread by a resulting virus, and after a cure was developed the human traits ware still passed on genetically by some.

In 2154, Klingon scientists working under the direction of Antaak recovered several Augment embryos from a hijacked Bird-of-Prey destroyed in orbit of Qu'Vat colony during the Augment Crisis. Fearing that Humans could overwhelm the Empire if they moved to staffing their ships with Augments, a project was set up to attempt to create their own Augments to counter the perceived threat.

The effort failed dreadfully. The Augments created did develop enhanced strength and intelligence, but they also began to show Human characteristics, from the blatant to the subtle. These included personality alterations and loss of the characteristic forehead ridges. Ultimately, the subjects died agonizing deaths when the incompatible DNA resulted in neural system breakdown. While working to stabilize the augmentation process, the scientific team enhanced a test subject who was, unknown to the team, also infected with Levodian flu. The flu virus in some manner incorporated the Augment DNA, turning a carefully controlled experiment into an epidemic. As the unstable augmentation process always killed the subject, this epidemic threatened the Klingon race with extinction.

The virus spread very rapidly, infecting millions within months. One of the first planets struck was N'Vak Colony. The Klingons attempted to capture Doctor Arik Soong to help develop a cure, but their efforts were thwarted by Soong's incarceration in a high security detention facility. They then moved to kidnap Doctor Phlox, using Rigelian intermediaries and the assistance of Section 31 agents. Phlox was forced to work with Antaak to find a cure. However, the Klingon High Council was unwilling to wait, and dispatched a fleet to annihilate the infected planets, starting with N'Vak Colony. Afterward it set course to Qu'Vat colony. (ENT: "Affliction")

When it became clear to the research team on Qu'vat colony that it would take weeks to develop a cure, stabilizing the augment virus became the researcher's primary concern. Their efforts proved successful; a method was developed that stabilized the process in the early stages, after the cranial ridges had dissolved and some minor neural re-ordering had occurred (which caused personality changes), but before the virus became contagious, enhanced augment abilities, and caused a fatal neural pathway breakdown.

Eventually, Admiral Krell convinced the High Council to call off their sterilization program of destroying the infected planets. The cure was distributed throughout the Empire. Because afflicted Klingons' DNA had been altered by the virus, the Human appearance and genetic traits were passed onto the descendants of the infected. Initially there were millions of Klingons who had to live with the disfigurement. (ENT: "Divergence")

In 2154, Antaak and Laneth feared that Klingons without ridges would become outcasts, lose their positions and would no longer have a place in the Empire. (ENT: "Divergence") However, by the 2260s, affected Klingons served as the captains and crews of front-line starships in the Klingon Defense Force. (Star Trek: The Original Series) Later on, some of them even achieved the title of Dahar Master and earned their statues among the Hall of Heroes on Qo'noS. (DS9: "Blood Oath", "The Sword of Kahless")

By the 24th century, knowledge of Klingons with smooth foreheads had been generally forgotten by the population of the United Federation of Planets. Also, the reason for Klingons having smooth foreheads a hundred years earlier was not widely known outside the Empire. When asked by Miles O'Brien and Julian Bashir, Worf simply gave the answer "we don't discuss it with outsiders", though Bashir immediately suspected viral mutation to be the cause. (DS9: "Trials and Tribble-ations")

At the time "Trials and Tribble-ations" was shot, nobody involved with the production of Trek had figured out an in-universe way to explain changes in makeup and costume budgets between 1966 and 1979 (when the Klingon cranial ridges first appeared in TMP). So at that time, there was no in-universe answer. Giving Worf the "we don't discuss it with outsiders" line was a good way to acknowledge that yes, we know there's a discrepancy on screen, but the explanation isn't relevant to the story that's happening right now. And it was a funny line, which was well-suited to the episode as a whole.

53
Kahless and Klingon Appearance
20
Are there in-universe explanations for how some species' appearances change between series?
9
Why do the Klingons in Into Darkness have cranial ridges?
5
Is there an in universe explanation for why klingons in Discovery look different similar to the viral change of TOS
2
What about half-Klingon hybrids?

6
What could the Department of Temporal Investigations do in the event of a time paradox?
10
Where did all the Tribbles go?
13
Shouldn't the Deep Space Nine crew now be in TOS episode "Trouble with Tribbles?"
4
Why not give the old Klingons ridges?
51
Why does Captain Kirk wear green in the DS9 episode Trials and Tribble-ations?
19
Was there a Star Trek novel in which Klingons had a short life span?
10
Are Tribbles sentient / have a civilization?
19
Is Raktajino Klingon like a bat'leth or Klingon like Shakespeare?