How were beings like the Living Tribunal and the One-Above-All formed?

Were beings like the Living Tribunal and the One-Above-All formed from the Infinity Gems?

Not by the Infinity Gems

The One-Above-All is 'apparently responsible for the existence of all life in the Multiverse and possibly beyond'.

The Infinity Gems 'are powerful artifacts that originate from a primordial universe inhabited by Celestials'.

Therefore the Infinity Gems are derivative of the Multiverse and so the One-Above-All was not formed by them.

The One-Above-All was not 'formed', being the principal of all that is

The One-Above-All, being a kind of analogue for the ultimate God of religion, is likely without beginning or end and so cannot have been 'formed'. As the principal of all universes, the One-Above-All is the un-caused and un-created One.

We know that nemesis is less powerful than TOAA because the full infinity gauntlet is nothing next to him. It would be probably impossible to create a being more powerful than yourself, Nemesis could not have created TOAA. He is meant to have created the entire multiverse, which I think includes her. As for him, I think he has no origin and always was and just decided to create the multiverse. As I understand it, he created all other cosmic beings to do their desired effects on the universe for him e.g Galactus was there to balance eternity with death.

Nemesis was the single being in existence. She created the multiverse when she shattered herself, and split into the infinity gems, the six singularities mentioned by the collector. This is what sparked the multiverse into being.

So, answering the question, they did exist as a single being, not separate entities before the multiverses were sparked into creation.

The four cosmic entities created the Infinity Stones, as seen on the walls of Morag in Guardians of the Galaxy 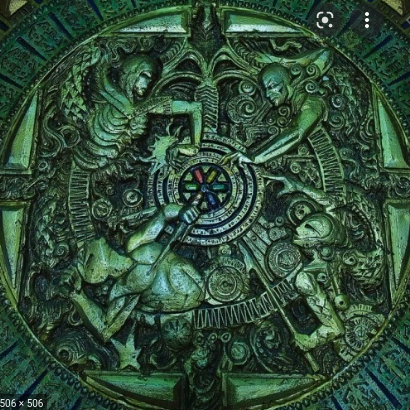 Not the answer you're looking for? Browse other questions tagged marvel the-living-tribunal or ask your own question.

10
Which Marvel cosmic entities are unique in the multiverse?
7
Is There a New One Above All?
8
In the Marvel Multiverse, Are Yahweh, God and the One-Above-All the same being?
5
What are the powers of "Staff of Living Tribunal"?
10
What's a "Cosmic Crime" according to The Living Tribunal?
1
How is King Thanos so strong in "Thanos Wins"?