How can keeping one's secret identity from a friend or beloved actually help protecting her or him?

In the contemporary Flash and Arrow series as well as in other superhero series, for example the DC bronze age comic books which I grew up with, the superheroes keep their secret identities from almost everybody except other superheroes (although the new TV series heroes are a little more relaxed in that regard).

They don't tell their relatives, close friends and loved ones even if it hurts or threatens to destroy those relationships. It always puts a lot of strain on them, at least. Their friends suspect something, are worried, stop trusting the heroes and so on.

The result is almost always disastrous. Barry Allen didn't tell Patty Spivot and lost her, Oliver Queen didn't tell his sister and pushed her into the arms of Malcolm Merlin, more recently Curtis Holt kept it from his loving husband and hurt him a lot when his lies became obvious. And so on.

In the bronze age, Clark Kent would always find some lame excuse when Superman was needed urgently, like telling Lois that he felt sick when some weird alien hovered over Metropolis, calling him out. Sometimes, acting out those excuses took quite some time - in those cases, the threat simply had to wait a moment, which in turn threatened other peoples lifes.

The official reason for that strategy: when asked why he didn't tell, Oliver Queen usually answers "I did it to protect her" (Stephen Amell pronounces tect with a lot of breath while widening his mouth and showing his teeth for emphasis). Superman/Clark had the same idea: protect your friends.

Obviously, not telling your spouse your secret identity helps you if s/he gets tortured and then can't tell the enemy who you really are.

But how can keeping that other identity from the person you love and trust possibly help that person? Any example?

In Spider-Man, Peter Parker kept his hero identity secret from his aunt in no small part to keep her from worrying about the dangers of his violent lifestyle. When she found out, it is plain that he was right to protect her... 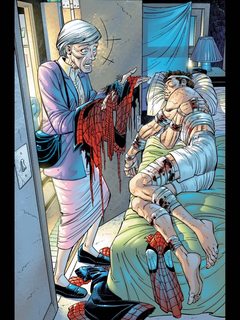 The idea is to keep their two lives compartmentalised. Bringing their Significant Other into the loop would affect that person's behaviour and make them more interested in the hero's activities, potentially to the extent of drawing the supervillain's attention to them and causing them to be targeted.

It's a slightly more extreme version of the real-world military practice of concealing the names and faces of their special forces members, though in that case the men are permitted to tell their immediate family that they are members of the special operations unit.

Having said that, as you pointed out a lot of newer incarnations of classic characters and stories are starting to walk back or deconstruct the trope (sometimes very badly, a la Patty Spivot).

If they know they are in danger, for a couple of reasons. They could get themselves involved, or be targeted, or leak information by accident.

Not the answer you're looking for? Browse other questions tagged dc comics secret-identity or ask your own question.

12
When is Clark Kent's favorite story revealed?
5
First time(s) other superheroes acknowledge Superman as morally superior to themselves?
9
90s/early 2000s animated Superman TV show episode in which Superman goes rogue under the influence of a sea star-like creature
13
How does the *in-universe* Marvel Comics handle sensitive information like secret identities?
2
When did Clark Kent [post-Crisis and New 52] meet and become the inspiration for the Legion of Superheroes?
5
Is the Smallville universe seen in the CW “Crisis” crossover an alternate reality from the Smallville universe we know?
5
Is there an official reason why J'onn J'onzz, The Martian Manhunter, was not seen in the 1970s and 80s “Superfriends” cartoons?