I've had a story dancing just out of reach of memory for some time now. I keep thinking Vernor Vinge "A Fire Upon the Deep", but the Tine's world had breathable atmosphere so I don't think it's it.

The part I'm remembering is a generation ship type setting, one of the youth becomes delusional and doesn't believe they're in an actual spaceship, some fraction of the other children start to believe him, I think resulting in an attempt to "leave the simulation", resulting in disaster.

Edit: to elaborate further, the children are classmates. The one who has the delusions gets a following of students, causing the student body basically to take sides forming two factions. There are adults onboard but they either aren't aware or dismiss the children's beliefs as harmless. This was a full length novel, this plot line taking place in the middle third of the novel (approximately), and I read it 3 to 5 years ago, but the novel may be older than this.

This sounds like Ark by Stephen Baxter (the sequel to Flood), published in 2009. 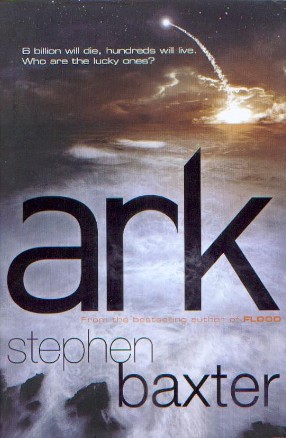 The events of Ark overlap with those of Flood: in preparation for a flood that will completely submerge the Earth's continents by 2052, the billionaire Nathan Lammockson builds Ark Three, a gigantic ship that will sail the waters of the drowned Earth. Skeptical of the project's viability, the U.S. government recruits billionaires Edward Kenzie, Patrick Groundwater and Jerzy Glemp to fund the construction of Ark One (later renamed Project Nimrod), a generation ship capable of superluminal travel using an Alcubierre warp drive. The plan is to fly Ark One to an Earth-like exoplanet and rebuild civilisation on the new world.

one of the youth becomes delusional and doesn't believe they're in an actual spaceship:

During transit, it emerges that Zane has dissociative identity disorder due to abusive parenting and sexual molestation by his Academy tutor

Kelly had kidnapped the ship's only doctor, so Zane is no longer undergoing therapy and spreads rumours that the ship is actually a virtual reality simulation.

some fraction of the other children start to believe him, I think resulting in an attempt to "leave the simulation", resulting in disaster:

The shipborn children, having never seen Earth for themselves, believe him and start a mutiny. Hoping to reveal the ship to be a simulation, they remove a metal plate from the hull, causing an uncontrolled decompression which kills and injures many passengers.

Not the answer you're looking for? Browse other questions tagged story-identification generation-ship or ask your own question.