Identify a (French?) comic series about a female adventurer

As a kid in the late 90s I read a comic book series in the library. The book format was similar to Asterix — thin hardcover books larger than DIN A4 paper. There must have been at least 5 issues. The version I read was in German, but I think it was originally French or Belgian, because of the style and the book format.

The art style was realistic compared to something like Tintin, but still comic-like with simple lines and colors and not much shading. It may have been inspired by Japanese comics. The main character was a young Asian woman with dark chin-length hair and somewhat yellow skin. There were a number of other characters, possibly some with blue skin.

The comic featured a lot of space travel, where the characters used form-fitting space suits with spherical transparent helmets. There may also have been time travel and other fantastic elements. The covers featured dramatic scenes, often the main character falling or otherwise being active in front of some large, dramatic setting.

I don't remember any specific plots or names, but I liked that comic and I'd like to revisit it.

This is almost certainly Yoko Tsuno, a franco-belgian comic series that features a young female electronics engineer from Japan. A Google image search shows many comic covers that I think match your description. 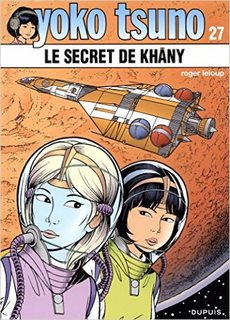 Yoko Tsuno first meets Vic and Pol when they catch her trying to break into a laboratory in Le Trio de l'étrange. The moment the men confront her, the owner of the laboratory explains that he hired the Japanese girl to test a burglar alarm system. Vic, intrigued by Yoko's knowledge in electrical engineering and planning to do an independent television production with Pol as the cameraman, asks Yoko to come along. However, their filming operation turns out to become the first of a whole series of strange adventures, as they stumble upon a secret underground enclave inhabitated by a highly advanced, blue-skinned people, the Vineans. This adventure forges a strong friendship between the three, inspiring them to stay together as the "Strange Trio", who join each other on surreal adventures on Earth, in outer space, and even the depths of bygone times.

The main characters are based in Belgium, although adventures take place around the world and even in the Vinean solar system, 2,500,000 light years away. When the stories are Earth-based, they mostly take place in existing settings, such as the German locations Burg Katz and Rothenburg ob der Tauber, the Chinese city of Hong Kong, or the Belgian city of Bruges.

4
Which Sci-Fi comic book series was the first to be based on a character after that character was featured in the movies?
7
Identify this futuristic graphic novel/comic book focused on interpersonal conflicts
13
identify this book about a human turned into a god by aliens
4
Comic book about a girl who can see monsters hidden among us
14
Comics about a quantum labyrinth
7
Looking for the name of a comic series about two wandering brothers
7
Comic about a space shuttle carrying the crew through space dragons
9
Book about a female protagonist travelling through space with alien creatures called the Leviathan