This is a classic tentacled alien movie. I watched this when I was really young so I can't really recall the title anymore.

The 1968 film The Green Slime fits what you're looking for (my bolding). 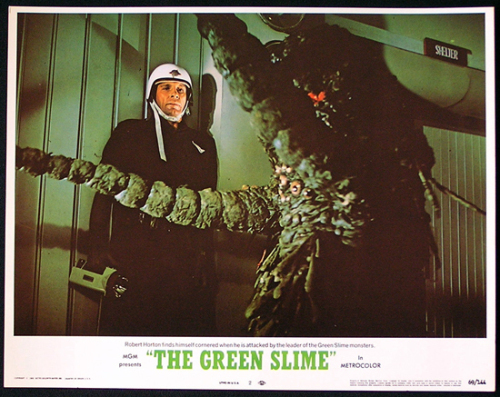 There’s a tense romantic and professional rivalry between Horton and his astronaut colleague Richard Jaeckel, and best of all there’s an onslaught of rapidly-multiplying alien monsters. The critters sneak on board the Gamma III space station after its astronauts return from blowing up a giant killer asteroid (a cool mission in itself). The men bring back a bit of sticky, foamy matter that looks like lime green jello, just enough to fill a thimble, but more than enough to spawn an army of aliens that will spell doom for the station, and possibly Earth as well. This tiny green blob feeds off energy sources, expanding with lightning speed to its final form, a one-eyed monster with a hide like prickly fruit. It waddles and squeaks, and flails its electrocuting tentacles about maniacally like the giant inflatable tube at your local car dealership. The crew shoots the things with lasers, isolates them with the airlock system, turns off the power and light (that works for a bit), but wounded aliens bleed, every drop of mucus spawns another horde, and soon there are oodles of them crawling along the outside of the station like barnacles. Game over for the Gamma, as crew decides to evacuate and nuke the joint on their way out.

7
Novel about first contact and traveling the universe at light-speed
4
Book with 2 or three short stories
7
Sci Fi movie about space battle against aliens that I watched on a VCR
6
TV show I think, where Aliens are leaving Earth, most people on Earth don't know that they are on Earth
9
Animated Movie identification (before 1990)
13
Old sci-fi novella where a space flight (and its astronaut protagonist) are threatened by radical anti-technology activists?
12
An animated sci-fi movie with a fully armoured antagonist and a pale looking child
8
Anime movie about space aliens and robots