At the beginning of Prometheus movie, the two archaeologists Elizabeth Shaw and Charlie Holloway discover a "star map" among several unconnected ancient cultures.

That map will led the Prometheus expedition to LV-223 (a moon of Calpamos planet in Zeta Reticuli binary star system), but how is this "star map" supposed to work? Many of those ancient cultures just painted 7-9 or so points in a wall, how can this point to a moon of a planet in a two star system at 40 light year from earth?

Relevant quote from the film's script:

... The same pictogram showing men worshiping giant beings pointing to the stars was discovered at every last one of them. The only galactic system that matched, was so far from earth that there's no way that these primitive ancient civilizations could have possibly known about.

But it just so happens, that that system has a sun. A lot like ours. And based on our long range scans, there seems to be a planet. Just one planet with a moon capable of sustaining life.

So the "star map" was not a map of stars at all, it was a map of a "system" (ie: the individual dots are not all stars, but celestial bodies - stars, planets, moons, etc - in general.)

After they identified the location of this system from Earth, they found that it has a sun similar to ours and that it contains exactly one planet, whose moon might be capable of supporting life. That's how they decided on their destination. The map was never a constellation of stars.

Clearly, the technology available to them in the future of the movie is far advanced from what we have today, if they can "scan" the entire galaxy from Earth and say with any certainty that there is only one "system" that matches this "map," but that's a different can of worms for another day and another question.

Depends on the dataset

A planar projection can be used to map points in a 3-Dimensional space to points on a 2-dimensional plane, so it is possible.

Now, whether or not the following artifacts [images from Prometheus] contain enough data to properly calculate the location of a planet is another question. We have, at least, 4 datasets containing an arrangement of bodies in space (planets, stars, etc) and an origin (Earth). Considering the timeframe involved, which would have to be as long as human civilization (or at least to point where humans had the ability to create artifacts such as these), it would be unlikely that the visible starfield from Earth would change orientation to a degree where projection couldn't be deduced with current real-world mathematics or astronomy search software (with powerful enough equipment, which may or may not exist depending on just how distant we are talking about).

I would imagine in the time of Prometheus their astronomy software and capabilities of starfield search would be much more advanced. Other answers have quoted relevant information in-universe for the reasoning behind their projections based on the artifacts.

In addition, notice the prominence of the moon in many of the artifacts. I believe that is intended as an orientation point, however it could also be representative of the moon that the events of LV-223, but I think that is doubtful. If the cuneiform in image one contains information regarding the relative date that the stele was created, that would provide even further data to make an accurate interpretation of the location sought. And if the other artifacts (Paleolithic, Mayan, Egyptian?) contain that type of data then all the better.

I just want to also note, I believe the very large (and often adorned with mystical iconography such as a halo) humans featured prominently in the artifacts are in fact the Engineers. The last panel (Mayan) seems to depict a "space jockey" in its pilot / navigator / cryo seat. I know Ridley Scott is quoted as saying they don't have to be, but I think that is just Ridley being deliberately obtuse. 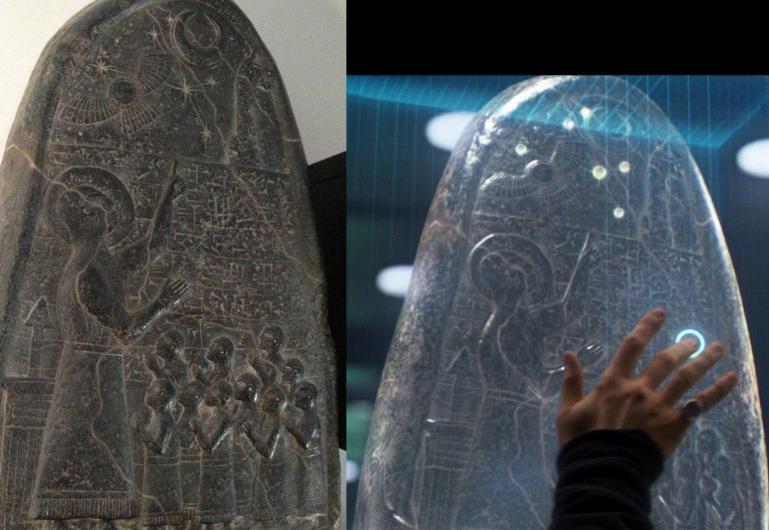 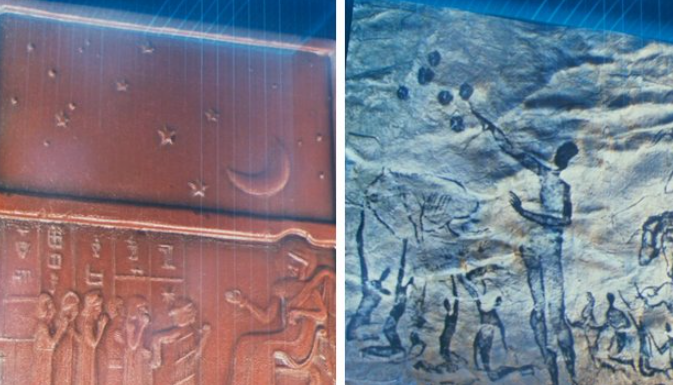 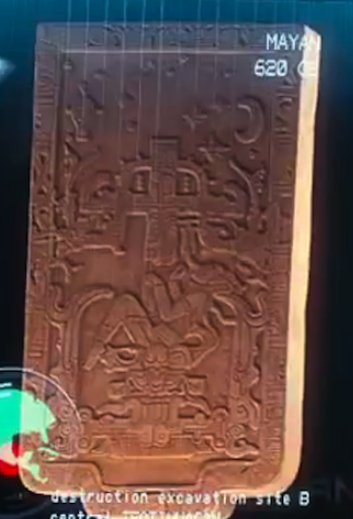 I think the star map represents the constellation of Lyre, with the Giants or Engineers pointing at Vega, the cuneiform stele actually shown fine lines conecting the stars 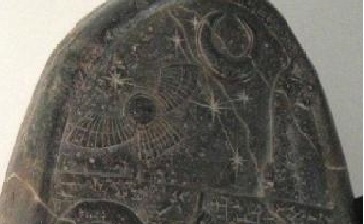 Configuration is similar to Lyra, differences can be explained by stellar drift. Vega or Alpha Lyrae was the pole star 12,000 years ago with a cycle each 26,000 years. Lyre is also known as Vulture cadens (Fallen vulture) by egyptians or Fallen eagle by the greeks. 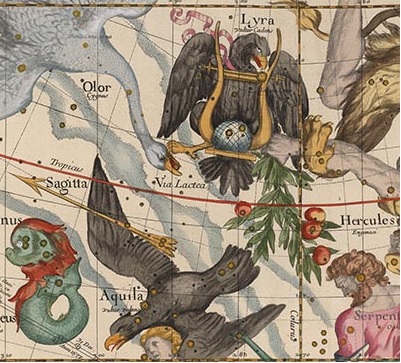 In Prometheus myth, an Eagle (or a vulture in some variants) descend upon the chained Titan to eat his liver. I think the murals depict where the Eagle (punishment) came from: Vega, or Zeus itself.

In mythology Zeus always came to Earth as an Eagle, Vulture or Swan, represented by the Summer triangle Vega (Vulture cadens), Deneb (Cygnus) and Altair (Aquila), the king of gods came from one these three stars.

After Zeus punished Prometheus, he sent Hermes, whose symbol is a LYRE and the FLUTE, to escort Pandora and the box (an urn containing all the evils) to earth, but the box was sealed on time. Later he sent a deluge but again his plans were foiled by Deucalion, descendant of Prometheus.

In hindu mythology, the equivalent of Zeus is Indra, whose son: Arjuna, was an expert in archery (the bow being the horseshoe shaped vessels) and the flute (again). Arjuna posesses the Pasupata astra, a weapon of god Shiva capable of destroying all animal life and cannot be unleashed against lesser enemies. The pasupata astra effects are similar if not the same as the Pandora's box (the urns) and the Deluge (and all meat died, all animals and beasts and mankind)

Elizabeth Shaw was wrong, first, she omitted the stellar drift, leading them to another place, not the origin. Second, it wasn't an invitation, was a warning, The gods, or a faction of them, were trying to destroy mankind. I think there's a coincidence they arrived at a place were the Pasupata astra was stored. In the myth, Arjuna never used it in the war, instead he returned it to Shiva and later he and his brothers and wife, walked towards the himalayas, and all died except the eldest, Yudhistir. The moon LV-223 had a huge mountain, several times bigger than the Everest, and at the feet of that mountain there were five engineer temples. I believe these are the five tombs of Arjuna, Bhima, Nakula, Shahadeva and their wife Draupadi, as Holloway said: It's just another tomb, and Shiva's weapon stored there along Arjuna's bow.

3
Why did the engineers leave the map to their military base planet?