I need help identifying a book I read in the 90s or early aughts. My Google-fu has failed me. Help me StackExchange, you're my only hope.

Anyway... Here's what I remember. Like the title says, it was a collection of short stories about how the old gods are adapting (or failing to adapt) to the modern world. It had a framing device that a newly formed god was being shown these events by a guardian angel/teacher, so he can understand how the gods fit in and what his place is. Beyond that I remember three specific elements.

Anyone remember this, or have the Google-fu to find it (assuming I'm not mixing up multiple books)?

(I'm putting the Norse Gods tag because Valhalla and a Valkyrie are the only things I remember for sure. Except an unknown Japanese goddess, and there is no Japanese gods/myths tag.)

I found it. Literally. It was in a box of books I lent to my parents, that my mom returned after I asked if they remembered this. Anyway:

The Gods of War: Introducing TEK: Lord of Battle 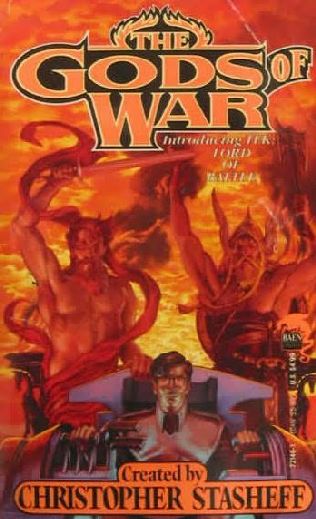 The titular Tek is the new god I described. And it turns out Gandalf'sFISTS was correct; it was Hell, not Hel; the story in question is Dispatches From Valhalla by Brian. M. Thomsen. The literal last line of the story is "And Valhalla is Hell."

And the duel I spoke of did happen, but in one of the framing episodes, not one of the stories. Don't want to spoil it any further.

Not the answer you're looking for? Browse other questions tagged story-identification short-stories norse-gods or ask your own question.

12
Short story/novella similar to the game, Black and White
7
Story about kids and book that tells about good old times in schools
3
Short story collection involving a beast with impenetrable armor eating an old man and getting indigestion
8
Identify this collection of SF short stores divided by era
4
Looking for a collection of short sci-fi stories
7
A collection of short stories involving dimension travel
13
Unknown fantasy novel, 1970s/80s where the gods of various religions are real, Christian god overthrows the pagans in ancient times