What is the coven structure of the Underworld franchise?

In Underworld: Blood Wars, we're introduced to the Nordic Coven, which seems to be older - or at least, less modern, than the Eastern Coven run by Thomas. In the original movie, Amelia was arriving from "across the sea" and I seem to recall her aide making reference to "two great covens".

This leaves me with two related questions: 1) Is the Eastern Coven the same coven Selene is from (seen in the first two movies), and 2) how many covens are there total in the world?

The original movies seem to take place in a European location like Prague, and also seems to be near Russia (as seen in the second movie). This lines up with it being the Eastern Coven. However, it makes me wonder why there isn't a Western Coven in America, or even just western Europe. Or perhaps a Southern Coven in the Middle East, that sort of thing.

The total number of covens isn't clear, but there have been vampire settlements in at least ten separate locations. By the end of Blood Wars, only the Eastern Coven and Nordic Coven are known to survive.

Here's what we know, based on all media in the series:

The first film was set in Ördögház, the seat of power of an unnamed coven. All three Elders had crypts at this coven. The usual fan term for this coven is the Old World Coven, to distinguish it from the coven in America, which fans call the New World Coven. During the first film, these were the only two covens known. The novelization of the first film places Ördögház near the town of Szentendre. The film was shot in Budapest.

This is where Selene lived during the first film.

Semira mentioned a Budapest Coven in Blood Wars. This may be the same as the Old World Coven.

The Rise of the Lycans novelization mentioned that Viktor held estates outside Buda before Castle Corvinus fell to the lycans. We have no further details about this, but I suspect that he would not entrust his estates to mortals, so there were likely vampires living near Buda before Castle Corvinus fell in the early 15th century. Given their close proximity, these estates may have merged with the Old World Coven after Viktor moved to Ördögház.

Before the Elders moved to Ördögház, they resided in a castle in the Romanian Carpathian mountains. Initially, this was the only coven in the world. The specific location isn't known, but it was within a couple days' travel of the city of Brașov. (Orsova mentioned that Lucian had sacked estates in Brașov a couple days after his escape. It was actually Lucian's army, while Lucian himself wasn't there, but Orsova didn't know that.)

After the castle was taken by the lycans in Rise of the Lycans, there is no further mention of vampires inhabiting the area. The survivors of this initial coven mostly relocated to Ördögház.

The location of the Eastern Coven is not specified. Blood Wars was filmed in Prague, and the castle used for the aerial shots of the Eastern Castle is Hluboká Castle, which is in southern Czech Republic. Amelia founded this coven in the 6th century, well before the Old World Coven was founded.

The Blood Wars comic calls this coven the Corvinus Coven.

This coven was the seat of the three new Elders at the end of Blood Wars.

Underworld: Endless War is set in Paris. I think that this coven was described as a branch of the Old World Coven, but I'm not sure.

Thomas's Coven was seen in Awakening. The specific location for this is not known. My opinion is that it's in western Europe; others hold it to be in or near Budapest. Based on clues in the film, a member of the Underworld forums, Rockchick 19, had this to say about the location of Thomas's Coven:

Based on a little research (mainly based on the presence of Skyscrapers, Catacombs and a relatively close dam/hydroelectric power plant) I would guess that Antigen Headquarters were most likely in Brussels, Belgium (Plenty of Skyscrapers, catacombs containing pieces of an old castle I think, Hydroelectric plant about 1hr 40mins away by car so with Vampire speed...) (Naples, Italy would probably be my second guess (there is only a small area in the city that has Skyscrapers) with London (no nearby dam/hydroelectric powerplant) and Paris (small number of skyscrapers and no dam/hydroeletric power plant) being possibilities, but far less likely).

Semira mentioned that Thomas had been at the Western Coven before moving to the Eastern Coven. This is most likely located in Western Europe. It may be the same as Thomas's Coven as seen in Awakening.

This coven is presumably located in one of the Nordic countries. Given the mountainous terrain and the fact that David and Selene were able to travel there by train from the Czech Republic, it's likely that the coven is located in the Scandinavian Mountains, in Norway or western Sweden. Amelia founded this coven.

Marius mentioned defeating the vampires in several other locations. I was not able to catch the names that he mentioned, but Rockchick 19 said this:

Marius mentions ... Volhynia, Nordgau and Thuringia. Volhynia is most likely Volhynie in North-Western Ukraine, Thuringia is in East-Central Germany, I can't get anything for Nordgau at the moment. The locations seem to be linked to the strategy that the arguing Lycans were discussing; the idea of 'wedging in' the Vampires so it's possible that Nordgau could be a location in perhaps Romania or Serbia as this would create a three-pronged attack with very narrow routes of escape for any Vampires :)

This coven was located in America. The official name and specific location are never given. Amelia apparently led this coven, or at least supervised it. It had its own council. I don't think it was ever mentioned again after the first film.

Covens on other continents

No covens outside of Europe or North America appear in the films. However, there may be covens all over the world. From an interview with the production designer of Blood Wars, Ondrej Nekvasil (emphasis mine):

Something that I noticed was that the scene we got to watch featured Selene fighting Marius (Tobias Menzies) using a more European-style sword. However, in the armory that I mentioned above there were Japanese blades, so I asked Nekvasil about the reasoning behind having a movie set in Europe yet having this Far East splash of flavor. “Because vampires, in the story, are kinda spread out around the world, so they are using different types of techniques,” he explained.

The hierarchy of covens is never stated. But as you mentioned, the first film made a reference to "both great Covens," as if the Old World Coven and New World Coven were preeminent. My take on this is that Castle Corvinus, and later the Old World Coven, ruled over all of the other European covens. Viktor, the most politically powerful vampire, ruled from these covens. The New World Coven may have been mostly independent, given its distance from Europe. After Ördögház fell, the most powerful surviving coven was the Eastern Coven. By the end of Blood Wars, this coven was the seat of the new Elders, and as such probably presides over any surviving vampire covens of Europe.

The comic of Blood Wars refers to the Western Sector, suggesting that covens are grouped into sectors. The terms Eastern Coven and Western Coven may simply mean the leading covens in their respective sectors, rather than being the proper names of those covens.

Here is a somewhat speculative hierarchy drawn by Rockchick 19: 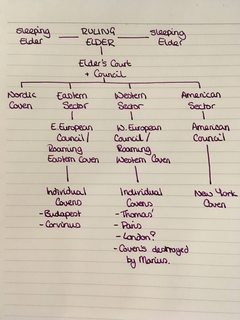 First in the beginning there is one coven the old world coven. Once William is found and locked away. They decide it's best for one ruler allowing them to leap from through time. Before doing so they created and trained 3 other covens deciding to branch off and grow there numbers this led to the creation of the new aged eastern and western and northern covens. There was no coven in america. The old world coven the eastern coven and western coven were all covens of Europe just east, west, northern europe. Over time due to there location in northern mountains the cold and terrain and distance alienated the northern coven from heart of the wars between lucan and vampire. They practiced other arts. In blood wars they mentioned always thinking the northern coven was just a made up thing. This is because during the old wars the northern coven was just so far out of the way they were not attacked and left alone. Samira was sent here when viktor took interest to Selena after william was locked away. Amelia created the eastern and western covens with close ties to the eastern coven. Amelia slumbered in the eastern coven and during these times she and thomas had there son. Viktor and marcus continuously dealt with the old world coven once william had been locked away. Viktor always wanted his slumber area near marcus and so when marcus would rule viktor army could always wake him up since they were loyal to him. 3 grand elders, one of which the creator being marcus but no one new that viktor was led to believe to he most powerful. So to most they knew 3 grand elders. Amelia viktor and marcus. Viktor and amelia sired elders for each conven. Those sired elders sired council for each coven each council sire more and then they sired till you have a coven. And grand master would only sire someone who would become an elder and elder would only sire a council and council only sire someone who will be under them. Selene was so huge because she was sired by viktor a grand master second only to creator. She then drank blood of the creator of all Alexander corvinus. Old world coven was the beginning when tanis was the historian.

Not the answer you're looking for? Browse other questions tagged underworld or ask your own question.

4
What granted the descendants of Corvinus the power of immortality?
4
Underworld 3: Sonja carrying Lucian's baby
3
What are the differences between Vampire and Lycan hybrids and purebred Vampires/Lycans?
2
What edition of Underworld has Rhona Mitra retconned into it?
7
Marcus vs Viktor in Underworld
7
When did humans forget about vampires/werewolves in Underworld?
6
Who is Wolfgang, played by Atilla Pinke, in Underworld?