In Logan, what disease is this character dying of?

is dying of some disease, which is causing him to age and not regenerate as well. When he is helped by the small town doctor, the doctor offers to run some tests to help determine what his illness is, but

I already know what it is.

Unfortunately, he doesn't share that information with the audience and we aren't told about it by other characters. What exactly is he dying of?

He's old and is being poisoned by his Adamantium implants

The film Logan has been created in such a way that it doesn't necessarily need to be explained in details. The writers and producers seem to feel that it works better this way. Logan is now not healing the same as he used to, and that's just the way it is.

Towards the end of the movie, in the secret hideaway shack Logan exaplains to Laura that it's the Adamantium in his body which is killing him.

LOGAN
I hurt people.
Laura takes this in. Then pulls something from her pocket. Logan’s Adamantium bullet.
LAURA
(in Spanish)
What is this?
LOGAN
You know what it is.
Logan nods, tries to sit up. In pain. She hands it to him. He rolls it in his fingers.
LOGAN (CONT’D)
It’s made of Adamantium. Same thing they put inside us. That’s why it can kill us. Probably killing me now. ...
- Mangold et al. (2016), "Logan", Final Shooting Draft Screenplay

In fact, in the Final Shooting Draft of the Screenplay, written by James Mangold, Scott Frank and Michael Green, they mention this exact point specifically:

Now might be a good time to talk about “fights” described in the next 100 or so pages. Basically, if you’re on the make for a hyper choreographed, gravity defying, city-block destroying, CG fuckathon, this ain’t your movie.

In this flick, people will get hurt or killed when shit falls on them. They will get just as hurt or just as killed if they get hit with something big and heavy like, say, a car. Should anyone in our story have the misfortune to fall off a roof or out a window, they won’t bounce. They will die.

As for our hero with his so-called eternal life and healing. Well, he’s older now. If you keep reading, you’ll discover Logan’s about to get his ass kicked. But before we get to that, we should make it clear his abilities ain’t what they were. Yes, he’s a drunk, but he’s also fading on the inside. Adamantium implants leeching into his system, causing chronic pain and diminished healing, hence booze as painkiller.

Now further to this, as explained by Thaddeus in this answer

This bonding of Adamantium to his skeleton has REDUCED Wolverine's regenerative ability because it is constantly having to negate all of the physical damage of being bonded to this dangerous but durable heavy metal.
-Thaddeus Howze, Oct 13 '11 at 4:57

Essentially, Logan is constantly battling his Adamantium poisoning. It's been fine in all of the other X-Men or Wolverine movies as his hyper-regeneration has been sustaining his health. However, it seems that now his healing factor has slowed down and his poisoning is taking over, as James Mangold (the executive producer and story writer of Logan) says:

So we questioned whether Logan’s healing factor causes him to heal without even a scar. We imagined that it may have when he was younger, but with age, he’s getting older and ailing. Perhaps his healing factor no longer produces baby-soft skin. So we imagined he heals quickly, still, but it leaves a scar.
-Logan trailer breakdown: James Mangold talks us through the teaser

Logan is an alcoholic, it is evident in the movie that he depends on the alcohol which he routinely drinks to ease his pain of suffering for his memories. 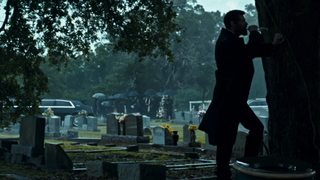 He has gone through a lot; 200 or so years of war, loss, pain and emotional distress. He has always enjoyed his alcohol, yet now he seems addicted to it. This would surely take its toll on him and his healing factor.

Logan's life has been one of pain and loss, he even says so in the movie whilst speaking to Laura in the secret shack:

Logan: I suck at this. Everyone I care for dies.
Laura: I'll be fine then.

This plays a lot on him, he feels both the pain of losing his mutant "family", as well as the survivor guilt for outliving them all.

Logan just looks like he's given up, he doesn't care whether he lives or dies, the only reason he hasn't committed suicide

via the Adamantium bullet he carries with him

is that he needs to take care of Prof. Charles.

Calaban makes a remark to this effect where he tells Logan that there's essentially something "broken" inside him.

As mentioned above, Logan has lived many, many years. All of which has been marred and tumultuous. IT can be assumed that his healing factor is simply slowing down.

But why is Logan so much more fragile than he appeared in Days of Future Past which was only 6 years prior to the events of Logan?

The Executive Producer and Story Writer, James Mangold, mentions in the same interview that he wanted this movie to be a standalone movie, one which obeys previous canon, but not necessarily exactly to a tee:

One of the things we all thought about as we worked on this film is, well, we don’t want to rebuild everything. We want to have some questions. In order to make a different Logan, and a different tone of a Wolverine movie, we felt like we couldn’t hold on to every tradition established in all the movies religiously, or we’d be trapped by the decisions made before us.
-Logan trailer breakdown: James Mangold talks us through the teaser

Additionally, if you think about it, in Days of Future Past, they effectively stopped Boliver Trask's plans to create the Sentinels, and so the timeline from early on would have gone much differently to what we see in the future of Days of Future Past.

Towards the end of the film, it is noted that corn syrup is being modified to have Mutant Gene Supression properties - most alcohol contains corn syrup, therefore, Logan's alcoholism is suppressing his mutant healing power.

Typically, anything that is sweetened artificially (certain sweet ciders, sweetened ales, alcopops, etc.) will use HFCS as it's cheap and easy.

Notably, during the film, Logan drinks fireball whisky, which does contain sweeteners (I'd also like to see a source that states that Logan doesn't drink cocktails, as that seems like inference).

Some information about sweeteners:

A brief google will also show info about fireball getting pulled from shelves a few years back in Europe until the level of sweetener was reduced to what European law considers an "acceptable" level.

67
How to kill Wolverine?
26
How can Charles Xavier be alive in the movie Logan?
22
Why did hot Adamantium not destroy Wolverine's body while replacing his skeleton?
24
Does Wolverine's healing factor still work properly in Logan (the movie)?

26
How can Charles Xavier be alive in the movie Logan?
24
Does Wolverine's healing factor still work properly in Logan (the movie)?
2
What is the track in the Logan (2017) trailer?
4
What are the non-contemporaneous items or design choices in Logan?
7
What are the essential films one needs to watch before "Logan"?
10
Does "Logan" have continuity with X-men movies? Which ones?
34
Did Logan intentionally pay off Yukio's prophecy?