How many times did Frodo wear The Ring in all movies/books combined?

I am trying to make a quiz and this is a question that I puzzled myself with. How many times did Frodo wear The Ring in all movies/books combined?

In the movies, there are only 4 times (even in the Extended editions) that Frodo wears The Ring.

He first wears it at Bree, giving us the iconic moment of The Ring flying up into the air and somehow landing on his finger.

The second time is on Weathertop, where he promptly got stabbed by The Witch-King of Angmar.

The third time is at Amon Hen, so that he might escape Boromir, who's gone mad and tries to take The Ring.

The fourth and last time was at Mount Doom, after proclaiming "The Ring is mine!" 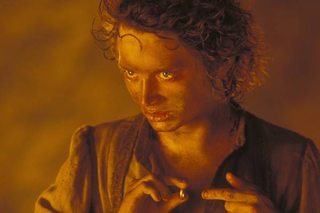 In addition to these events, there are 2 other times Frodo wore The Ring in the books, one being at the Barrow-Downs, the other being at Tom Bombadil's house. As neither of these locations were present in the movies, the aforementioned events were not shown on-screen.

The answer by DistrubedNeo documents all four times that Frodo wears the Ring in the movies, I'll try to do the same for the books.

Of course it's quite possible that, before he learned that it was the One Ring, Frodo wore the ring several times just as Bilbo did. In the house at Crickhollow, Pippin tells Frodo how he became aware of Bilbo's Ring.

‘It was the Sackville-Bagginses that were his downfall, as you might expect. One day, a year before the Party, I happened to be walking along the road, when I saw Bilbo ahead. Suddenly in the distance the S.-B.s appeared, coming towards us. Bilbo slowed down, and then hey presto! he vanished. I was so startled that I hardly had the wits to hide myself in a more ordinary fashion; but I got through the hedge and walked along the field inside. I was peeping through into the road, after the S.-B.s had passed, and was looking straight at Bilbo when he suddenly reappeared. I caught a glint of gold as he put something back in his trouser-pocket.

Tom asks to see the Ring, Frodo hands it to him and Tom puts it on but doesn't disappear, then he hands the Ring back to Frodo. Frodo puts it on to make sure it really is his Ring.

Frodo looked at it closely, and rather suspiciously (like one who has lent a trinket to a juggler). It was the same Ring, or looked the same and weighed the same: for that Ring had always seemed to Frodo to weigh strangely heavy in the hand. But something prompted him to make sure. He was perhaps a trifle annoyed with Tom for seeming to make so light of what even Gandalf thought so perilously important. He waited for an opportunity, when the talk was going again, and Tom was telling an absurd story about badgers and their queer ways – then he slipped the Ring on.

The Lord of the Rings Book One, Chapter 7: In the House of Tom Bombadil
Page 133 (Houghton Mifflin Harcourt; Single Volume 50th Anniversary Edition)

2: In the Prancing Pony

Frodo "accidentally" puts on the Ring at the end of the song he sings in the Prancing Pony. He is already clasping the Ring in his pocket before he begins his song.

The Lord of the Rings Book One, Chapter 9: At the Sign of the Prancing Pony
Page 157 (Houghton Mifflin Harcourt; Single Volume 50th Anniversary Edition)

At the end of his song, he falls and disappears, much to the astonishment of his audience. The next we read is:

Frodo felt a fool. Not knowing what else to do, he crawled away under the tables to the dark corner by Strider, who sat unmoved, giving no sign of his thoughts. Frodo leaned back against the wall and took off the Ring. How it came to be on his finger he could not tell. He could only suppose that he had been handling it in his pocket while he sang, and that somehow it had slipped on when he stuck out his hand with a jerk to save his fall. For a moment he wondered if the Ring itself had not played him a trick; perhaps it had tried to reveal itself in response to some wish or command that was felt in the room.

The Lord of the Rings Book One, Chapter 9: At the Sign of the Prancing Pony
Page 160 (Houghton Mifflin Harcourt; Single Volume 50th Anniversary Edition)

3. During the attack on Weathertop

When the Nazgûl attack the hobbits and Aragorn on Weathertop, Frodo succumbs to the temptation to put on the Ring.

Not with the hope of escape, or of doing anything, either good or bad: he simply felt that he must take the Ring and put it on his finger. He could not speak. He felt Sam looking at him, as if he knew that his master was in some great trouble, but he could not turn towards him. He shut his eyes and struggled for a while; but resistance became unbearable, and at last he slowly drew out the chain, and slipped the Ring on the forefinger of his left hand.

The Lord of the Rings Book One, Chapter 11: A Knife in the Dark
Page 195 (Houghton Mifflin Harcourt; Single Volume 50th Anniversary Edition)

After looking in the Mirror of Galdriel, Frodo asks why, as the Ring-bearer, he can't see the other rings and know the thoughts of those that wear them. In her answer, Galadriel confirms that, at that point, Frodo has worn the Ring three times since he learned what it was.

‘You have not tried,’ she said. ‘Only thrice have you set the Ring upon your finger since you knew what you possessed.

4. To escape from Boromir on Amon Hen

Boromir asks Frodo to lend him the Ring so he can use it to defeat Sauron. When Frodo refuses, Boromir tries to take it and Frodo puts on the Ring to help him get away.

Frodo dodged aside and again put the stone between them. There was only one thing he could do: trembling he pulled out the Ring upon its chain and quickly slipped it on his finger, even as Boromir sprang at him again. The Man gasped, stared for a moment amazed, and then ran wildly about, seeking here and there among the rocks and trees.

5. To leave the Fellowship without being seen

After escaping from Boromir, Frodo goes to the summit of Amon Hen and becomes aware of the Eye searching for him. Before he is found, Gandalf (although we don't yet know it is him) pursuades Frodo to take off the Ring. Frodo decides he must leave the Fellowship and travel alone to Mordor. He knows that his friends won't let him go alone, so he puts on the Ring to get away without being seen.

‘They’ll be hunting for me,’ he said. ‘I wonder how long I have been away. Hours, I should think.’ He hesitated. ‘What can I do?’ he muttered. ‘I must go now or I shall never go. I shan’t get a chance again. I hate leaving them, and like this without any explanation. But surely they will understand. Sam will. And what else can I do?’

Slowly he drew out the Ring and put it on once more. He vanished and passed down the hill, less than a rustle of the wind.

6. At the Sammath Naur

When Frodo finally reaches the Cracks of Doom, he fails his mission and claims the Ring for himself.

Then Frodo stirred and spoke with a clear voice, indeed with a voice clearer and more powerful than Sam had ever heard him use, and it rose above the throb and turmoil of Mount Doom, ringing in the roof and walls. ‘I have come,’ he said. ‘But I do not choose now to do what I came to do. I will not do this deed. The Ring is mine!’ And suddenly, as he set it on his finger, he vanished from Sam’s sight.

Frodo did NOT wear the ring in the Barrow-Down in the book. He was tempted and considered it but instead seized a short sword that lay beside him and hacked off the hand of the Barrow-wight that was creeping toward him.

However, he DID wear the ring six times. He wore it twice on Amon Hen; once to escape from Boromir, and a second time to sneak back to camp, get his pack, and leave with a boat unseen.

13
How many times did Gandalf touch the One Ring in the books?

15
How many different wearers of the One Ring were there?
27
Did Gandalf wear his Ring of Power throughout the trilogy?
46
What did Bilbo Baggins do while the Fellowship of the Ring went on their quest?
7
Why was Frodo not allowed to wear the Ring before Rivendell but was allowed after?
20
How did Gollum know Frodo was going to destroy the ring?
6
Why did the Ringwraiths wear cloaks?
20
Does Smeagol/Gollum ever truly align himself with Frodo and Sam, or is he a'schemin' the whole time they're all together?
8
Why did Gandalf tell Saruman that the One Ring is with Frodo?
13
How many times did Gandalf touch the One Ring in the books?
12
In the movies why does Frodo try to give the One Ring to Aragorn?