I'm trying to pin down a science fiction novel I once glanced at. English language, published in paperback, not by any "famous author" whose name I recognized at the time. "At the time" was in the mid-1990s; no later than 1996. The copy I looked at was not something brand new at the time; it was probably at least a year or two old before I stumbled across it.

I think I read the first two or three chapters, at least, and then skipped ahead to glance through the final pages to see if the story was going to improve any. (I'm pretty sure I decided the answer was "No!" At any rate, I never actually forced myself to read the entire volume.)

I remember nothing about the ending, but I do recall the basic plot of the first chapter or so.

Anyway, while I didn't feel the writing was brilliant, I do find myself curious about just who wrote this book, and what its title was. It's conceivable that the book had hidden depths which might strike me more favorably if I gave it another chance after more than two decades. (Or perhaps if I glanced at the first book in the series first, if I'm correct that this one was a sequel.) Does anyone think this book sounds familiar?

Bearing in mind that it definitely was not written by anyone who was already a Very Big Name in the science fiction industry of the mid-1990s -- I'm sure this book was by someone I literally had never heard of before. That eliminates any stories about futuristic professional assassins which may have been written by such people as Poul Anderson, Gordon R. Dickson, Roger Zelazny, C.J. Cherryh, etc. (And I'm sure it was science fiction, rather than having "a medieval fantasy world setting" with professional assassins running around in it, such as we have seen in books by Robin Hobb, Tanya Huff, Steven Brust, etc.)

I think you're talking about the second book in Stephen Leigh's Hoorka Trilogy (also known as the NewEden Trilogy): Slow Fall to Dawn, Dance of the Hag, and A Quiet of Stone. The trilogy has been collected and reprinted in a single omnibus titled Assassin's Dawn.

ASSASSINS' DAWN is the omnibus edition of my first three books (below), which comprised a trilogy about a group of "ethical assassins' called the Hoorka. They live on a backwater world called Neweden, whose culture and society tolerates assassinations and violent confrontations, and so the Hoorka fill an ecological niche in this society. They don't guarantee the death of the contracted victim, only that the attempt of the person's life will be made... because only the gods can decide whether a person should live or die.

This works for Neweden, but Gyll, the creator of the Hoorka, has aspirations for the guild to go offworld, into the realm of the Alliance -- a new and growing organization that is trying to knit back together a shattered and forgotten empire. But will the Hoorka be able to co-exist on worlds whose social structure is not the same as Neweden's? Can they survive the transition, and will the Alliance permit them to do so?

The second book, Dance of the Hag, specifically follows Gyll. 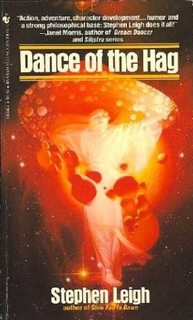 On the bloodsoaked feudal world of Neweden, the Hoorka assassins' guild has survived by adherence to a strict code of honor. Lethal killers, shadowy black-robed agents of destruction, they are pledged to give Fate a chance to free their victims from the claws of Hag Death.

But now the Alliance has allowed Hoorka to operate offworld, the assassins' code is breaking down, and Ulthane Gyll. founder and former leader of the Hoorka, finds the deadly fighting force he created turning against him....

Sounds like an early trilogy from the Foreigner universe. From the Wiki:

assassination is a legal and accepted means of settling disputes, provided proper protocol is followed. One files a document of Intent which liberates the target to file one back.