In which comic was it revealed that Alfred was the Joker?

There was a comic book where Alfred is shown sitting alone in a room, putting on the Joker make-up, thereby revealing him as the Joker.

It was probably an alternate universe, but in which comic book did this happen?

You're most likely describing this scene from Batman: Whatever Happened to the Caped Crusader?. Alfred isn't really The Joker, he's merely pretending to be him. 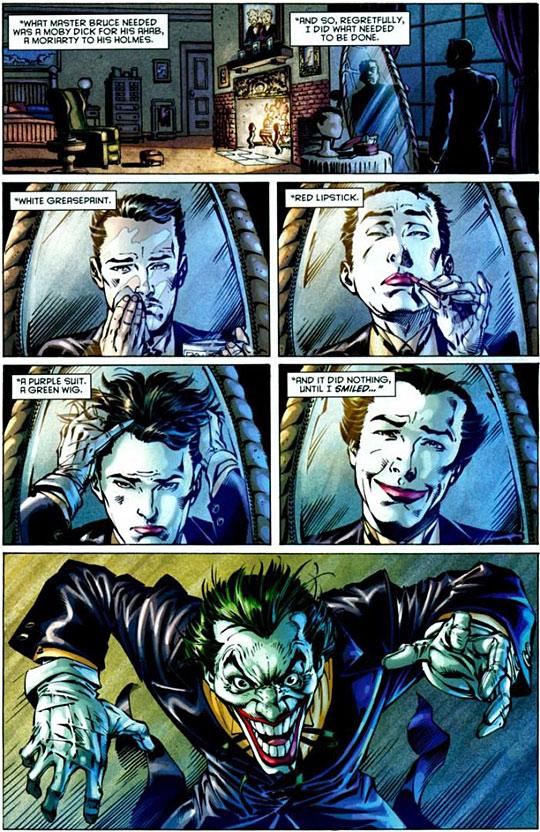 A quick search brought up Batman #686 ("Whatever Happened to the Caped Crusader? (Part 1 of 2): The Beginning of the End") from February 2009, set in an alternate version of Gotham City. It is revealed that

Batman is dying, and is having an out of body experience in which he is present at his own wake

Alfred is recounting the tale of Batman's beginning, which was not successful. It turns out that

Alfred hired several people to play the role of supervillains for Batman to fight. Alfred himself adopted the persona and visage of the Joker to give Batman a nemesis to focus on. (This story was not true however, owing to the fact that the Joker himself was also present at the wake)

7
Which comic book super villain was the first to match wits against a different super hero?
6
In which Batman comic issue was there a plague of illiteracy?
4
Which Batman comic had the Joker trick a man into thinking he was ugly?
13
Is Alfred the moral conscience of Bruce Wayne/Batman?
3
Which was the Wonder Woman and Spider-Man crossover comic book?
5
Was the Three Jokers storyline ever explained?
11
In which comic does Batman travel back in time to the night of his parents’ murder?
5
Searching for a Batman comic where Batman had no dialogue and Robin and Alfred were the primary characters
3
Is there any indication that 2021's "The Batman" and 2019's "Joker" are in the same world?