What are the pronunciations associated with the stargate symbols?

I haven't watched the shows in years, but if I remember correctly each stargate symbol has an arbitrarily assigned "name" which may be a consonant, vowel or syllable. The ancients used these to identify addresses in speech, like Earth's numerical designations, and sometimes assigned meanings to certain addresses (e.g. one was lost in fire?).

Were the names explained anywhere? I cannot find a list through google except for obvious fanfiction which contradicts the show's names.

The vocalizations of the Stargate glyphs are only ever described in a single episode, the season 7 finale "Lost City", when Jack sounds out seven of them, corresponding to the address of Praclarush Taonas1 (glyphs pictured below), plus the Earth point-of-origin: 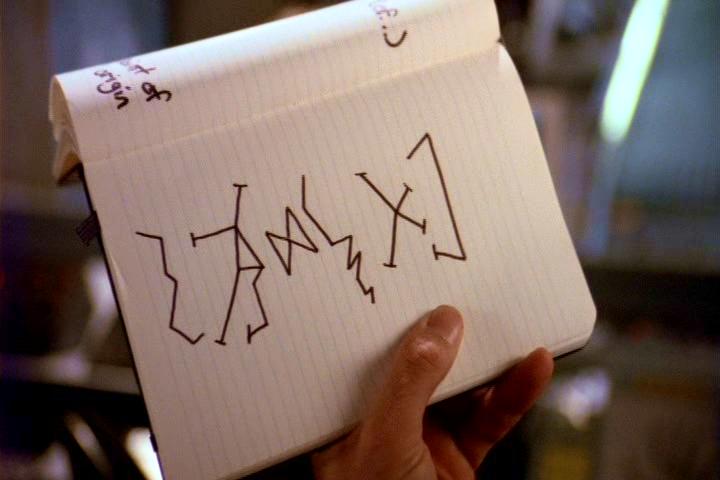 Determining how to divide "Praclarush Taonas" into six syllables, such that "sh" is the third, is left as an exercise for the reader.

This leaves 31 glyphs, in the Milky Way alone, with no identifiable vocalizations. It's presumed that they exist, but they're never mentioned on the show. Likewise, if this vocalization scheme is used in the other gate systems we see (Pegasus and Destiny gates), it's never discussed.

1 Which Daniel translates as "Lost in Fire" (later revealed to have been mostly-swallowed by a volcano):

Daniel: Praclarush Taonas. According to this it means lost in fire. It was lost.

Not only does s7e22 mention the Ancient names of planets, but also s10e3: The Pegasus Project.
While trying to find Merlins weapon, Morgan le Fay mentions two worlds by their Ancient names: Taoth Vaclarush and Valos Cor.

The addresses are shown on the hologram (albeit not in high quality) so more symbols may be mapped, but Valos Cor sounds a bit short.

Further than the s7 episode, none of the symbols are explained but the pronunciation of Vaclarush implies the writers may have still be drawing from the same schema. It may be possible to cross refernce sounds and symbols between the sources, but a complete 1-to-1 mapping is not outlined in the series.

I was going to post as a comment on Jason Bakers answer but I lack the rep.

At is cannonly translated as "home" which is why its the sound of the symbol for Earth (Terra), this also means Atlantis is translated as "home of the Lanteans" which is completely independent of the name of any planet. No matter where Atlantis is, its still the home of the Lanteans (Ancients). To my knowledge, this is the only glyph whose phonetics we know for sure.

10
What is the Range of the Average Stargate?
14
What Was the Purpose of Different Point of Origin Symbols?
12
Are all Stargate addresses pronounceable in Ancient?
14
What causes the stargate to sometimes open instantly?
8
How Would a Newly Built Stargate With a DHD Be Able to Bootstrap Into The "Stargate Network"?
6
What exactly do the eighth and ninth symbols in a stargate address represent?
5
What Methods Are Used to Generate and Transfer Power to the Stargate?
14
How can the Stargate symbols represent constellations?
5
What are the songs played in Stargate: Atlantis' *Vegas* episode?
12
Are any of the hieroglyphs, runes, etc. appearing in Stargate intelligible/meaningful?