From where did Luke get kyber crystals to build a lightsaber?

After Luke lost his lightsaber in the cloud city, he built a new lightsaber. For this, he needed kyber crystals.

Rogue One: A Star Wars Story movie shows that Empire was controlling kyber crystal reservoirs. While stealing a box of kyber crystals from Empire goons shouldn't be difficult, I am concerned about a ritual in which younglings find crystals hidden behind mysteries (a Star Wars: The Clone Wars episode is in my mind).

Does the canon mention from where did Luke actually get the crystals?

There seems to be no specific description of where Luke got the kyber crystal from, other than that he was missing the "right pieces" needed for the construction of a lightsaber and found those parts (possibly including the crystal) amongst Ben's possessions on Tatooine.

It makes sense for Ben to have had a lightsaber spare parts given that he was expecting to be there for a considerable amount of time and, critically, would have wanted Luke to construct his own saber at the end of his training.

And yet he seemed to know exactly what he needed to know. Reaching out with his mind, he found the right pieces—some easily purchased, some much harder to acquire.

After leaving Obi-Wan’s hut, he knew he had at last collected everything he needed. While our other heroes bustled about preparing for the rescue, Luke retreated into the solitude of a desert cave and puzzled over the pieces….In the end it took not just physical tools but also the Force to put it all together and bring the crystal inside to life.

There's also mention in Heir to the Jedi that Luke was able to salvage a working lightsaber that belonged to a former Jedi. This included a kyber crystal and several focusing crystals.

“All right, I understand. Just a moment.” I collected the pieces of Huulik’s lightsaber and placed them in a small bag. “Come on, Artoo,” I said. “We have to run and hide again.”

That being said, the kyber crystal in question was amethyst, not green although we do also now know that crystals can change colour depending on the user.

Within the Legends Canon there is an extensive sequence in Shadows of the Empire describing how Luke, unable to locate a real lightsaber crystal, was forced to use Ben's recipe for synthetic crystals.

His teacher hadn’t left much behind, not for a man who had once been Obi-Wan Kenobi, a Jedi Knight and a general in the Clone Wars. Perhaps the most valuable thing was the old and intricately carved boawood trunk and its contents, including an ancient leather-bound book. A book that contained all manner of wondrous things for a would-be Jedi, such as plans for building a lightsaber. The thumbprint clasp on the volume had accepted Luke’s right thumb to unlock it, and once it was open, he saw the flashpacket rigged inside the cover. Had anybody tried to force the clasp, the book would have burst into flame.

Somehow, Ben had known Luke would find this book. Somehow, he had prepared it so that only he could open it safely.

According to that book, the best lightsabers used natural jewels, but there weren’t a lot of the kind he needed lying around where he could find them on Tatooine. He’d managed to collect most of the electronic and mechanical parts in Mos Eisley-power cells, controls, a high-energy reflector cup-but he had to make his own focusing jewel. Ideally, the best lightsabers also had three of those, different densities and facets, for a fully adjustable blade, but for his first attempt at building the Jedi weapon, Luke wanted to keep it as simple as possible. Even so, it was trickier than the book made it out. He was pretty sure he had the superconductor tuned right, the amplitude for the length set where it was supposed to be, and the control circuitry boards correctly installed. He couldn’t be positive until the jewel was finished, and the book didn’t mention exactly how long that took. Supposedly the furnace would shut down automatically when it was done.

If everything went right, he’d be able to cut the jewel, polish and install it, tune the photoharmonics, and then he’d only have to hit the switch to have a working lightsaber. He had followed the instructions to the letter; he was pretty good with tools and it ought to be okay, but there was a small worry that when he switched it on it might not work. That would be embarrassing. Or worse, it might work in a way it wasn’t supposed to. That would be worse than embarrassing: Luke Skywalker, up-and-coming Jedi Knight, a man who had gone one-on-one with Darth Vader and lived to tell of it, vaporized when his faulty lightsaber blew up. So far he’d been very careful constructing the thing, triple-checking each step, and to get this far had taken almost a month. The book said a Jedi Master in a hurry could construct a new lightsaber in a couple of days.

Star Wars: Shadows of the Empire

There is a fan theory for how Luke got a crystal for his new lightsaber:
His crystal came from Qui-Gon Jinn's lightsaber.

You can see it on this statue of when Obi-Wan Kenobi was a middle-aged man trekking across the desert on Tatooine. If you look carefully, you will see he has three lightsabers. His personal lightsaber is in his hand. Anakin's is the one with the silver hilt attached to his back cloak. Qui-Gon Jinn's is the one with the black hilt right next to Anakin's. (Not sure why he attached them to his cloak instead of his belt.) 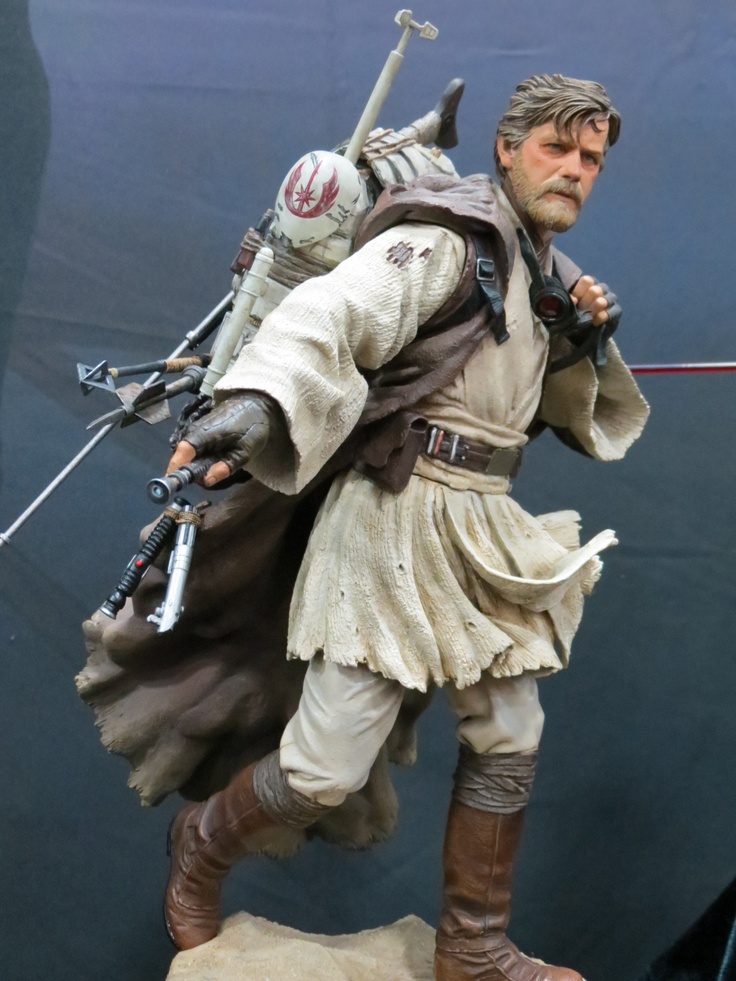 And at 4:20 in this video clip, a man explains that Obi-Wan has his master's lightsaber.

So what happened to Qui-Gon Jinn's lightsaber? When Obi-wan Kenobi left Tatooine on the Millenium Falcon, he left behind many of his belongings in his hut. When Luke went back to Tatooine to rescue Han, he went to Kenobi's hut and found the old lightsaber. He studied it, repaired it, and used the crystal from it to make his new one.

31
Where did Luke Skywalker learn to build his own lightsaber?
-4
Where did the Kyber crystals come from?

63
Did Luke accomplish anything by going to Cloud City?
30
Is the chest in Maz Kanata’s basement the same chest as the one in Obi-Wan Kenobi’s hut?
6
Does standing or hanging upside down improve one's connection to the Force?
22
Why isn't Luke's lightsaber red?
8
Could Chirrut Îmwe have constructed a lightsaber out of Jyn’s kyber crystal?
14
Do Jedi knights take the lightsabers of enemies they have defeated?
13
Novel from Star Wars universe where Leia fights Darth Vader and drops him off a cliff