How did Bumi lose to Aang in S1E5?

Aang's fight with King Bumi ended with Aang holding the tip of his staff at Bumi and Bumi holding a giant boulder above them both. Considering nothing comes out of the tip of the staff and considering that Bumi could just drop the boulder (and simply create a hole for him to pass through while still crushing Aang), I fail to see how this was was Aang's victory.

I realize he doesn't want to kill or seriously injure Aang, but was he simply done playing with him perhaps? 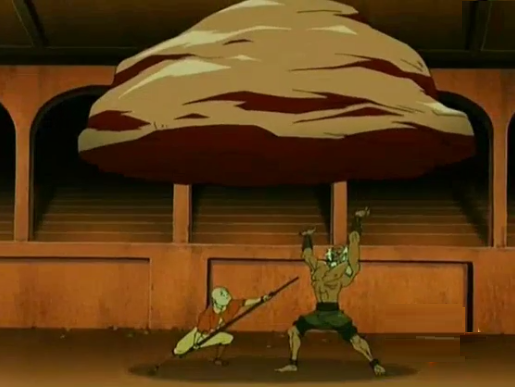 Bumi seems far more concerned with seeing what the Avatar can do in a fight than in actually defeating him. Sure, some of his rocks would have probably killed Aang if they'd hit him, but that's the rockbender way. No pain, no gain.

Note that the King is very clear that Aang has passed all of his tests, including the final one, "a duel". No-one said that it had to be to the death.

King Bumi: Typical airbender tactic: avoid and evade. I'd hoped the Avatar would be less predictable. Don't you have any surprises for me? Sooner or later, you'll have to strike back.

King Bumi: Hehe! Well done, Avatar. You fight with much fire in your heart. You've passed all my tests

At the end of the episode we learn that Bumi is in fact one of Aang's friends, now older and substantially wiser. These tests weren't intended simply for the King's amusement, they were to train Aang and to get him ready for the difficulties ahead.

Sokka: Why did you do all this instead of just telling Aang who you were?

King Bumi: First of all, it's pretty fun messing with people, hehe, but I do have a reason. Aang, you have a difficult task ahead. The world has changed in the hundred years you've been gone. It's the duty of the Avatar to restore balance to the world by defeating Fire Lord Ozai. You have much to learn. You must master the four elements and confront the Fire Lord, and when you do, I hope you will think like a mad genius!

5
Why it was so important for Bumi that Momo was with Aang while he was preparing for the final battle?
17
How did Avatar Aang have a wife and kids?
8
So what if Fire Lord Sozin was able to kill Aang?
30
Why didn't Toph teach Aang metalbending?
4
How is the Avatar cycle maintained even after Aang severs his connection with Roku?
7
What kind of Lion Turtle taught Aang Energy bending?
7
Was Aang aware of Raava, Wan etc?
5
Why wasn't Aang trying harder to reconnect with the Avatar State in Book 3?
7
Why did the guru tell Aang he needs to stop feeling “earthly attachments” to enter the Avatar State?
8
Is Aang related to Korra?