Movie about a boy, two men, a robot and a war

I saw this movie about 12 years ago (2005) when I was about 8 years old but it probably came out way earlier than that since I saw it on local TV in West Africa. I remember there being a little boy who built a full-sized humanoid robot with wires/cables everywhere. I have a vague memory of this robot sitting in a chair as the boy turned it on. He met some men (I think two friends), they seemed very impressed with what he had built and one of them adopted him and he started to live with them. There was some sort of war/fight and one of the men died. He might have died trying to save the boy but I am not sure. I remember the scene where that guy was cremated with the surviving man standing and watching with his arm around the little boy while looking really sad as dead guy's body was burnt.

The boy was quite young, maybe around 10. I am pretty sure he and most of the other characters were white. I remember really enjoying the emotional bond between him and the guy that 'adopted' him. He would teach the boy lots of things. I think there were flying cars and some advanced weaponry. I also remember the scene where the boy turned on the robot as being very dusty/deserty and crowded.

I really hope this makes sense to someone. I have tried to google for this movie but the only thing that comes up close is AI artificial intelligence. I am 90% sure that this little boy is human anyway so that's not it. I either saw this movie on a black and white TV or it had dull scenery.

This movie started my fascination with robotics and AI. I hope someone recognizes it!

Could it be Star Wars: Episode I – The Phantom Menace?

I doubt you would have missed it, but this strikes me as a very similar scenario. Maybe a low budget "remake" of some sort? It appears they have dropped Jar-jar on the way...

There was some sort of war/fight and one of the men died. (Battle of Naboo, Qui-gon dies.) I remember the scene where that guy was cremated with the surviving man standing and watching with his arm around the little boy while looking really sad as the dead guy's body was burnt.

With the exception of the emotional bond, this actually sounds a lot like Star Wars Episode 1: The Phantom Menace.* The story starts off focusing on the person (named Qui-Gon Jinn) who will later adopt the young boy, named Anakin, who they meet on a desert planet by chance. The boy had a robot he built and the people he met were most definitely impressed by what he had been able to accomplish. They then "adopt" him into their order, called the Jedi Order, which is basically a sci-fi version of knight peace-keepers. There are several scenes with spaceships/hovercraft and sci-fi weapons. The entire movie did not take place on a desert planet, but a good portion did. It was not made in black and white, but it definitely could have been broadcasted in black and white. I have attached some pictures from the movie below to see if they jog your memory.

*Note: If this seems like the correct movie, I would recommend seeing this post on the site as this movie is part of a six-part series, and there are now two other movies in the same franchise as well as multiple books and TV shows. I would recommend watching the movies in the order on the top answer and if you like the universe expanding out into the other movies/books/shows. The Star Wars Universe is pretty expansive and a very popular topic in (at least in America, not sure about West Africa) both in pop culture and on the web, including this site! 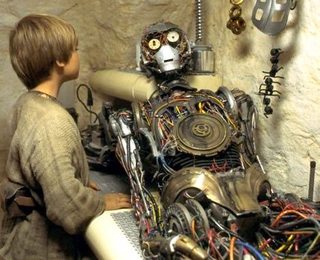 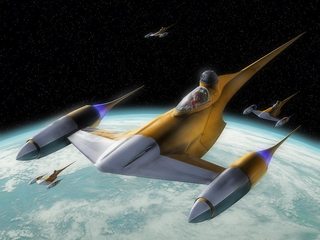 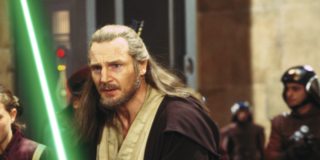 299
In what order should the Star Wars movies be watched?
15
Old movie about alien eggs inside cave

33
Title of a time travel movie involving a boy in alien armor and a girl?
8
Anime movie boy finds old giant war robot buried in side of cliff
2
Science fiction movie about a guy with superpowers and two pistols
6
Horror movie about a robot kid with claws for hands
5
Pre '96 cartoon: boy remote controls white robot
6
Movie about a boy who gets turned invisible by a robot