I will try to stick to guidelines, but I have seen only a part of single episode of this series (It might be a movie too, but I have a gut feeling that it was a series). I saw it on TV somewhere around the year 2012, possibly. It was dubbed, so the original was probably released a little earlier. I don't remember much, but there was some kind of epidemy on Earth that required frequent medicine injection to veins of wrist. The part of the plot I remember was, that people were running out of this vital medicine and the main character was trying to find out, what is causing the shortage or how to stop the epidemy. I don't remember the actor, or how he looked exactly, but I think he looked around 30 years old. The medicine had very interesting and distinct name, but unfortunately,I don't remember it clearly but I think, that if I heard it again, I would recognize the name.

One scene I remember very vividly was the injection procedure. On some public place, there was a short plain column (pillar maybe, English is not my native language), maybe a meter tall, resembling those small fountains for drinking water you find in schools or playgrounds. Like this: Behind it, there was line of miserable people waiting for injection. The injection procedure went as follows: You placed your palm on the top of the column, round metal thing appeared to hold your hand in place (the motion and the shape of this metal holder resembled visor on motorcycle helmet) and from the top of the column syringe needle went straight into your wrist and injected the medicine(that means, it went from the bottom of your hand). I remember the scene after, the lady that was injected has shown her hand to camera and the area where palm meets wrist was all blue and bruisy.

The whole atmosphere was very gloomy, it was in some urban area, everything was dark, dusty, people had those sad looks on their faces and their clothes had sad colours, for example pale brown, gray and similar.

It was live action, I don't remember any fancy technology or aliens appearing there. I think the buildings, interiors and attire were very similar to ordinary fashion we see everyday.

Check out Do or Die from the syfy channel 2003. Everyone has a rapid aging disease that is kept in check by "cream." I think that is the name of the drug. My memory gets shaky on that point. Most importantly it has a water fountain-like device the downtrodden line up to place their palm against it and get an injection. I will try to find links when I get to a computer. 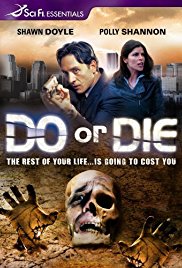 The Amazon listing mentions the name of the drug, "Anzanol":

In the near future, rapid aging disease rips through the planet, infecting more than half the population and dividing them into two groups: "cleans" and "infecteds." Once infected, you age one year every day unless you take a daily dose of Anzanol, the only drug that can slow the process. When Ruth Hennessey (Polly Shannon) becomes pregnant by her infected husband, she fears that her baby will be afflicted as well. As her husband dies, he tells her that he was close to finding a cure. His final words send her on a journey to save her unborn baby and, in turn, the rest of the population. Along the way, the man in charge of creating Anzanol will stop at nothing, even murder, to keep his empire thriving.

This might be the 2014 movie The Giver. It definitely has the wrist-injections, which the dystopian society uses to eliminate emotions.

from the IMDB page:

After The Ruin, a colorless equalitarian society is formed without memories and everyone follows rules established by the Chief Elder and the Elders. The population uses drugs to stay happy and on the day of the graduation, the teenagers leave their childhood and are assigned to a career chosen by the Elders. Jonas lives with his parents and has two best friends, Fiona and Asher, and he feels different from his friends. He is assigned to be the Receiver of Memories and he is trained by his mentor, The Giver, who gives memories of the world before The Ruin. Jonas learns emotions such as love and fear and the concept of family. When he discovers that the baby Gabriel that he loves as a brother will be eliminated, he decides to change his society but the Chief Elder will do anything to stop him.

7
Storyline involving killer robots that harvest legs
6
Looking for a movie where everybody has false memories. Possibly Dark City
9
Help identify a collection of short stories
11
Story ID: Boy who is stuck at 5 years old with robot nanny
11
Looking for a short story about a robot that didn't want to die alone so he built another robot to keep him company until his "death"?
8
Movie/series about people fighting off a fake human to protect a pregnant woman
3
Horror movie where an abandoned monastery/asylum conducted experiments on people with fly toxin