Why did Otto Octavius use tentacles mounted on himself instead of remote controlled robots?

To be able to manipulate radioactive substances, Otto Octavius created a device with four tentacle-like, mechanical arms. I've not read the original comic books, but I've seen Spider-Man 2. The Marvel Wikia page on Otto Octavius doesn't fully agree with the film, but both involve accidents. Considering the risk involved, why did he not use remote controlled robots instead? The device itself is not responsible for what happened, but using robots, he could have overseen from a safer location, and since he's depicted as a genius, he surely would have been able to create robot-like machines (though he might have called them something else), even in 1963 (when, according to the wiki, he first appeared).

The out-of-universe reason is most likely that without the tentacles, he wouldn't be Doctor Octopus.

In the 2003 comic Doctor Octopus: Negative Exposure, Octavious reveals this to nobody in particular (unless you count DaVinci's ghost who isn't there).

DaVinci's Vitruvian Man greatly inspired him, and he sought to emulate what he saw as eight appendages.

Using a bunch of remote controlled tentacles not attached to him by a harness would hardly resemble the drawing, now would it?

As I was saying, it was this, your seminal sketch, "Proportional Study of Man in the Manner of Vitruvius," which forever changed my life.

Your perfect human specimen, with his eight gloriously symmetrical appendages, inspired my humble contribution to the world of invention. 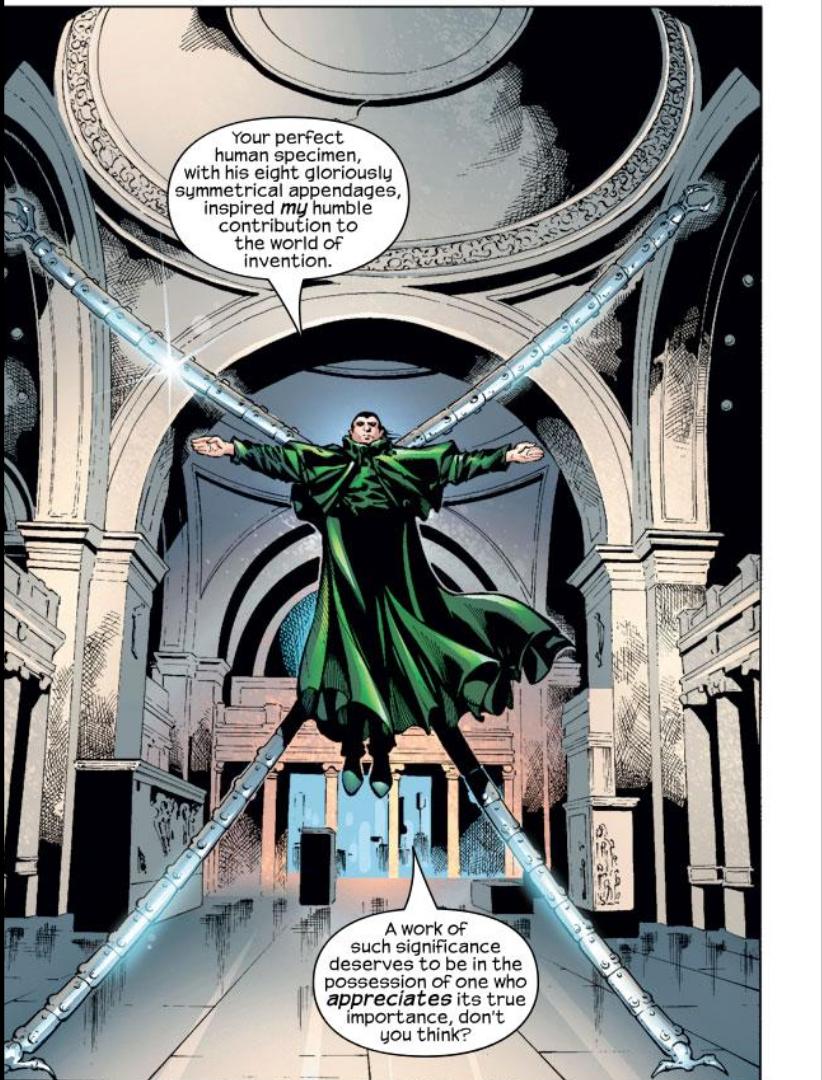 This was addressed in the official novelisation for Spider-Man 2. In short, Doc Ock was sick and tired of not having enough hands. They were inspired, it seems, by the humble octopus.

Octavius loved the design he had created for the arms. It had come to him one day after a visit to the Coney Island Aquarium: the answer to the endless frustration of trying to perform experiments and wishing one had more hands at one’s disposal. Thanks to the four actuators—which, he had to admit, sounded like the name of a singing group—a scientist could have all the hands he reasonably needed. And they weren’t even the main invention he’d developed. They were merely tools he would use to help get the fusion generator started up.

In the 2005 5-issue miniseries Doctor Octopus: Year One, we learn Otto had been raised in the nuclear era, and thus, as a brilliant child, dreamed of bringing nuclear energy to the forefront, leaving coal behind. Somehow, this fascination became something akin to love, and so he created the arms, attaching them to his nervous system, in order to give himself the ability to feel radiation as basically a 6th sense.

I recognize that I am extremely late to the party, but as an amateur Doc Ock fan, I think I can answer this. phantom42 answered this partially, but I believe his source may have been expanded on, as his was published in 2003, and mine was 2005.

19
In last scene of X-Men: First Class, why didn't Xavier use Shaw against Magneto instead of begging and losing?
7
In "One More Day," did Spider-Man really have to make a deal with Mephisto?
2
How is the timeline of Marvel established amid the multiverse, reboots, etc?
12
Why did Ego not collect his children himself?
6
Why did Gambit always use the Ace of Spades?
2
Why did Thor get himself captured?
6
In Iron Man 2, why did Tony Stark not use a battery to keep the magnet working instead of poisoning himself with Paladium?
9
In the MCU, how did they decide to use a subtitle for the movie instead of numbers?
26
Why didn't Thor use the All powerful spear instead of Stormbreaker?
12
Why did the TVA arrest variants at all, instead of resetting them?