I remember a connected series of science fiction children's books at my library from when I was a kid. This was 1983-1986, and the books might have been a few years old. These were not long books - maybe 25-35 pages each. Hardcover, and several illustrations per book. I remember the title font being that very traditional "computer font" from the early 80's.

The stories concerned the multi-ethnic crew of a space station dealing with various sci-fi tropes, such as plague in space, loss of life-support, etc. I remember it as being kind of a cross between Star Trek and Space 1999. The tone was serious, not cartoony. I remember the space plague book because they thought the plague was smallpox, but then solved it by using an old library book to identify the symptoms as chicken pox. I remember them carrying the library book out of the archive in a special container so it wouldn't crumble to dust.

One other standout detail that might jog someone's memory: one of the crew members had a pet. It was a semi-intelligent pink blob, about the size of a small dog, that could change its shape. It had a small box attached to itself that it could use to communicate via ticker tape. In one story the blob stretched itself out into a rope to climb through a pipe to rescue someone or perform some vital task.

Ah-ha! Found it in another post on this forum:

Series was called "Galaxy 1", by various authors. I tried a more thorough search looking for the "pink blob" and "little computer" and (seriously) "tracksuits" :-) . . . because the crew all wore them per 70's space drama cliche.

Thank to everyone who offered suggestions. I just found someone on eBay selling a set of these for a buck a piece (in hardcover). It will be a nice nostalgia trip.

Barbapapa or a Shmoo.... but I think it's Barbapapa you're looking for. 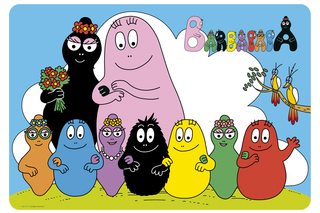 The main characters in the books are the Barbapapa family, who are most notable for their ability to shapeshift at will. In their native form, Barbapapas are blob-shaped, with a distinct head and arms, but no legs. Male Barbapapas have rounder bottoms, whereas female Barbapapas have a more slender form. Each Barbapapa can adopt any form they choose, but they remain easily identifiable by always retaining their faces and their distinctive colour.

Not the answer you're looking for? Browse other questions tagged story-identification short-stories childrens-novel or ask your own question.

9
Children’s books, one in space setting, the other in a jungle
7
Sci-fi series with a war against pink blob-like bad guys who can mentally inflict pain
10
SF book from the 80's or 90's about a Space Cop who is made into a slave with a pain/pleasure implant?
7
Late 70s Early 80s Children's SF Book Series
5
Identify Sci Fi children's book series from 1960s (or earlier)
15
Science Fiction book identification Series with smart-ass AI
5
Fantasy book, group of women meets group of (mercenaries?) men, has a shipwreck scene
3
Kids' book where kids foil alien invasions (early 2000s)