Book about dolphins with sonar "telepathy"

In the 2000s or 2010s, I read a review about a sci-fi novel in which we learned that dolphins could not only navigate by echolocation, but communicate by it.

In other words, a dolphin could "squeak" in such a way that would appear, to another dolphin's sonar sense, the same as a rock or other solid object.

The author, if I recall correctly, referred to this as telepathy, because one dolphin could transmit "images" to another. Technically, however, it's transmitting sonograms.

This may be Into the Deep by Ken Grimwood. The dolphins in this book manage to communicate with humans as well.

Set on land and beneath the oceans, Into the Deep reveals, once again, Ken Grimwood's exceptional talent for blending fantasy and reality. One part thriller, one part spiritual adventure, the exhilarating story at the heart of Into the Deep involves a hard-hitting journalist, a beautiful scientist, a globe-traveling engineer, and a venerable Portuguese fisherman. Vastly different, their lives are about to intersect and to become irrevocably changed by a school of dolphins--as the fate of the world hangs in the balance. With the drama that unfolds from a silent war waged at the sea's greatest depths and from a single, fateful discovery, Into the Deep takes a tantalizing glimpse at the optimistic future this planet might achieve if humans and the creatures of the deep could learn to share and defend its remarkable bounty.

The Dolphins of Pern Novel by Anne McCaffrey

Two boys, one of them a dragonrider, re-establish crucial contact with the wise dolphins, the legendary "shipfish" of Pern.

Aboard the starship Streaker, Thomas Orley — a human who is skilled in this dolphin communication method — creates a sound-shape to pull Captain Creideiki (a dolphin) out of a blue mood:

Orley noticed his friend’s mood. He pursed his lips and whistled. His breather mask amplified a faint sound-shadow picture. The little echo danced and hopped like a mad elf from corner to corner in the oxywater-filled chamber. Workers in the weapons pod lifted their narrow, sound-sensitive jaws to follow the skipping sonar image as it scampered unseen, chittering in mock sympathy.

The sound-wraith vanished, but laughter remained.

Creideiki let the mirth settle. Then, from his brow came a pattern of chamber-filling clicks that merged to mimic the sounds of thunderclouds gathering. In the closed room those present heard raindrops blown before the wind. Tom closed his eyes to let the sound-image of a sea squall close over him.

Startide Rising is the second novel of The Uplift Saga by David Brin.

You can borrow Startide Rising as an e-book from The Open Library. 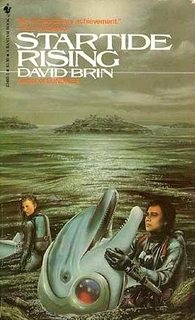 14
Dystopian near future where paper is banned because it can't be monitored remotely (digitally?)
3
Book that talked about the language of dolphins (before the science confirmed it)?