At the end of Doctor Strange, the doctor

makes a bargain with Dormammu, turning off the infinite time loop in exchange for leaving the Earth alone, and never coming back.

When I saw this, I immediately wondered, what holds Dormammu to this bargain? Once

the time loop is turned off,

why not kill Strange and company? He is no longer threatened at that point.

For a graphic representation of this question, see the YouTube clip, below:

NB: this is similar to, but not the same as Is there another way out for Dormammu? -- that question asked about before the bargain; I am asking about after the bargain.

This promise that Dormammu makes (not to attack Earth directly) is taken straight from the comic universe, though the context is different. 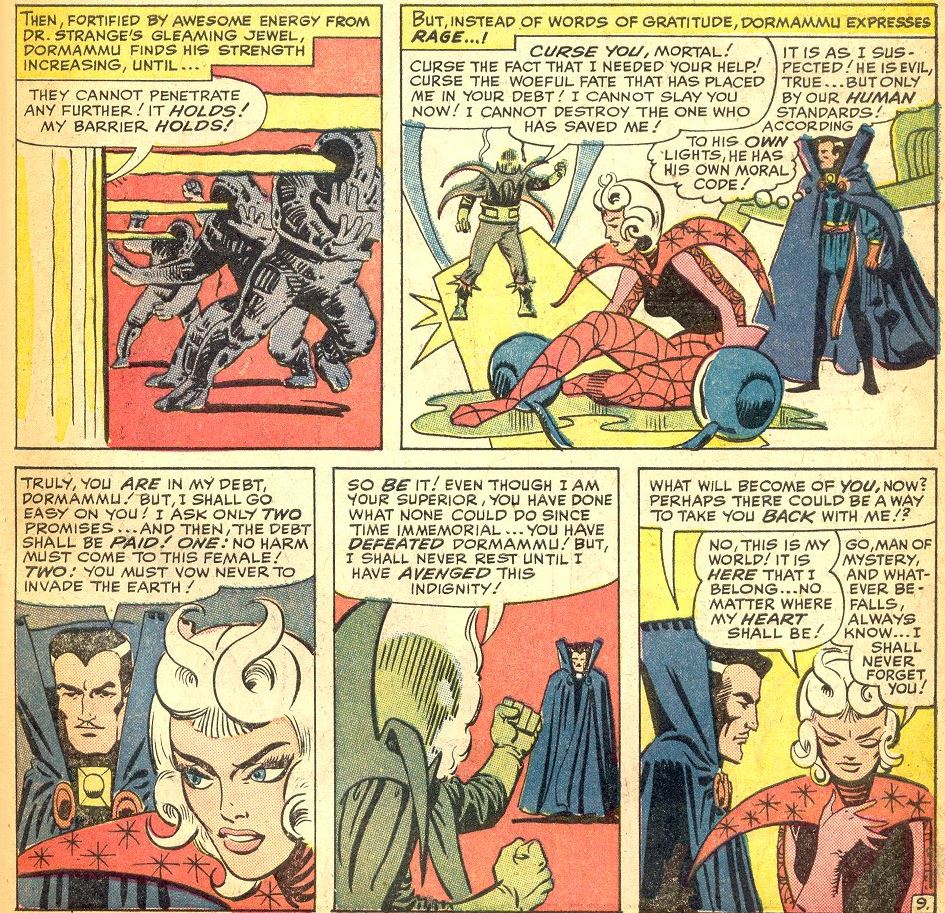 In the comics, Dormammu has a rigid morality. According to Strange:

STRANGE: He is evil, true…but only by our human standards. According to his own lights, he has his own moral code!

Whether there is something supernatural to this is unclear. It seems very likely, though. Other media (not canon to the comics or movies, naturally) do imply as much. For example, the Infernal Promise card from Marvel’s War of Heroes card game.

Mortal! Do not take lightly the oaths of Dread Dormammu! There is power in the promises of beings such as myself! I will honor any agreement between us! But a simple misstep on your part might undo our arrangement! And when that happens, Dormammu will owe you no such thing as mercy!

More generally, supernatural beings are often depicted as being forced to keep their word: Faeries not lying, Greek gods taking oaths of the River Styx, deals with the Devil.

Would Strange know this, though? Probably. He has been studying magic for some time, and probably knows the rules that bind entities such as Dormammu. Even if he doesn’t, can we be sure he’d really be willing to be stuck in a loop for all eternity? Perhaps he’s simply taking a chance, and hoping Dormammu keeps his promise (as he does in the comics).

Then, too, Strange still has the Time Gem. If Dormammu tries again, it’s quite possible that Strange would just put him back in the loop. That would serve as a strong deterrent, even if Dormammu is not magically bound to his promise.

14
Is there another way out for Dormammu?

9
When did Ben Franklin sleep with Doctor Strange's girlfriend?
14
Is there another way out for Dormammu?
1
How durable are Dr. Strange's Mandalas of Light in the movie?
13
Why is there no world Dormammu wants more than Earth?
5
What are the powers of “Staff of Living Tribunal”?
7
How was Kaecilius able to break through Doctor Strange's time magic?
0
Is Dormammu the “satan” of the Marvel Universe?
11
How relevant are gestural components for Doctor Strange's magic?
7
What is Dr. Strange's source of income?
7
Which characters are present in Dr. Strange's Tarot Deck?