I wonder if someone will be able to help me with finding an old fantasy book or series I read a long time ago. Unfortunately I'm not sure about many of the details.

I think it had some attempts to explain and rationalize some aspects of magic. I don't think it explained how magic actually worked, but still made it seem like there were some sort of logical and understandable rules. I give two specific examples below, but there might have been more that I don't remember.

I think there was some sort of explanation about having to say seemingly irrelevant words for casting spells, maybe they were chosen by the person initially creating the spell.

I think there were werewolves, and probably were-bears or were-something-else people too, some explanation about conservation of mass during transformation, maybe also a difference between transformation by using a magic spell and transformation from inborn ability.

I think there was the stereotypical full-moon-causing-involunatry-transformation thing.

I think a woman (main character? more likely love interest for the male main character?) was forced to transform into a wolf by something and got into some trouble, maybe was chased/hunted.

I think there might have been a part where a wound while transformed stays after the end of the transformation - the woman werewolf was injured?

I think it might have been told in first person, past tense. Then again this really doesn't work well for the parts describing the adventures of "love interest for the male main character", so maybe not.

I think it might have been a series and not just a single novel/book.

Unfortunately I may also be mixing up different stories or even just your usual stereotypes and clichés, of which as you see I listed plenty. So if you can think of something only partially matching these points, don't hesitate to answer anyway.

I think there is a fighting chance that you are remembering Operation Chaos, by Poul Anderson. A little Googling tells me it's had several different cover illustrations over the years, but here's a scan of the same artwork that's on the front of my old copy. 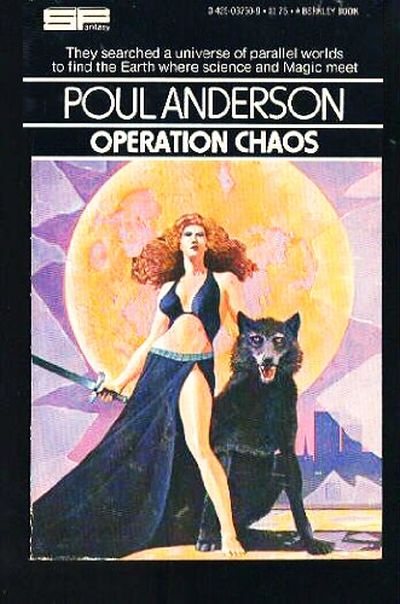 Originally Anderson wrote some fantasy stories, with the same co-stars, and all set in the same "alternate timeline" where magic was very well-developed in the Twentieth Century, with those stories being published separately in magazines. Then he combined them, did a little rewriting, and ended up with what was first published in book form in 1971 as Operation Chaos. Many years later there was a sequel, deliberately written as a novel instead of being a "fixer-upper" from previous shorter works: Operation Luna.

The narrator of these stories is Steven Matuchek, a hereditary werewolf. In the first story ("Operation Afreet"), he is introduced to a charming young lady named Virginia Greylock, an "adept" (i.e. an expert witch). They work very well together in a dangerous commando-style mission, and later on they become a happily married couple.

Here are some passages from the first part of the book -- what was originally published as "Operation Afreet." I'll try to pair them up with relevant bits of what you remembered and described.

I think there were werewolves, and probably were-bears or were-something-else people too, some explanation about conservation of mass during transformation, maybe also a difference between transformation by using a magic spell and transformation from inborn ability.

I weigh a hundred and eighty pounds, and the conservation of mass holds good like any other law of nature, so I was a pretty big wolf.

And later he says:

You see, while practically anyone can learn a few simple cantrips, to operate a presensitized broomstick or vacuum cleaner or turret lathe or whatever, only a small minority of the human race can qualify as adepts. Besides years of study and practice, that takes inborn talent. It's kind of like therianthropy: if you're one of the rare persons with chromosomes for that, you can change into your characteristic animal almost by instinct; otherwise you need a transformation performed on you by powerful outside forces.

I think there might have been a part where a wound while transformed stays after the end of the transformation - the woman werewolf was injured?

At one point, Matuchek tells us something about the general rules of being wounded while in your magical were form:

A natural therianthrope in his beast shape isn't quite as invulnerable as most people believe. Aside from things like silver -- biochemical poisons to a metabolism in that semifluid state -- damage which stops a vital organ will stop life; amputations are permanent unless a surgeon is near to sew the part back on before its cells die; and so on and so on, no pun intended. We are a hardy sort, however. I'd taken a blow that probably broke my neck. The spinal cord not being totally severed, the damage had healed at standard therio speed.

I'm not sure, offhand, that the female star ever turns into a wolf, but I did remember that, at the end of "Operation Afreet," having had a big piece of his tail bitten off (when in wolf form) by an enemy weretiger, Matuchek described the aftermath of that injury (relevant to what he'd previously said about "amputations"):

I don't have many souvenirs of the war. It was an ugly time and best forgotten. But one keepsake will always be with me, in spite of the plastic surgeons' best efforts. As a wolf, I've got a stumpy tail, and as a man I don't like to sit down in wet weather.

That's a hell of a thing to receive a Purple Heart for.

I think there was some sort of explanation about having to say seemingly irrelevant words for casting spells, maybe they were chosen by the person initially creating the spell.

Steven Matuchek explained to us that it was necessary to use an exotic language to cast spells. Although, from various references throughout this book, I got the impression that the most important thing was: "Is this an exotic and unusual language by your standards?" (Though it wouldn't have been anything special by the standards of people of a past era who used to speak that language all day, every day -- such as Latin in the heyday of the Roman Empire.) At any rate, here's a sample of what he says (not going into that much detail here):

I went over the spells I'd haywired. A real technician has to know at least one arcane language -- Latin, Greek, classical Arabic, Sanskrit, Old Norse, or the like -- for the standard reasons of sympathetic science. Paranatural phenomena are not strongly influenced by ordinary speech. But except for the usual tag-ends of incantations, the minimum to operate the gadgets of daily life, I was no scholar.

4
SF / Fantasy crossover, 90's
6
Trying to recall the title of a series of fantasy books about wizards with keys
5
Fantasy book with an adopted son called Boy
7
Fantasy book about elves and spiders I read when a teen
6
Fantasy anime with blond male who lives with his female senpai
9
Young adult fantasy trilogy with a large symbol and coloured background
10
Fantasy series with Celtic overtones, intermittent stone magic, and ongoing slow magic