Where are Beszel and Ul Qoma?

I'm currently rereading "The City and The City", by China Mieville. This is a New Weird crime fiction novel set in two cities/city-states (Beszel and Ul Qoma) in SE Europe which occupy the same location - 'grosstopically', in the terminology of the book - and whose inhabitants are culturally conditioned to ignore everything that is not in their own city for fear of invoking a possibly supernatural force called Breach (about which we learn a little more later in the book).

My question is whether we can work out from the book where these cities are. On first reading I think I assumed that the location was deliberately inconsistent or ambiguous, but I'm noticing a number of potentially informative details. For example:

There are a number of linguistic and cultural details that probably count as clues to someone more familiar with the region than me.

@Daniel-Roseman's comment reminded me there are other hints that Ul Qoma is formerly part of the Ottoman Empire and has parallels to Turkey, such as:

I believe the Besz protagonist also mentions something about the architecture which struck me as vaguely Ottoman, but I can't find the quote. It's clearly supposed to give the impression of inheriting substantial cultural aspects from the Ottoman Empire but that could still place it almost anywhere in SE Europe.

I also know almost nothing about present-day Ottoman influences on Bulgaria, Romania, etc, so although these would all be consistent with a location on the Turkish-Bulgarian border I don't know to what extent they make other locations less likely. Also, the fact that Beszel does not display these influences could suggest a location closer to the fringes of the former Ottoman Empire.

I tried to mark all references to real-world or large-scale geography when reading the book (except some redundant ones later), so the following should at least be close to exhaustive:

Besźel and Ul Qoma are:

All of these points are fulfilled only by a location near the Black Sea somewhere between Varna and the Ukraine: 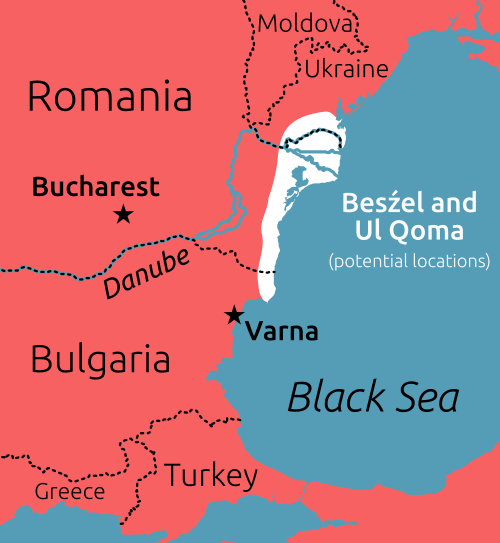 The most fitting locations within this are:

… and what about culture?

Either way, this location also is in line with most of the cultural and linguistic hints we are given about Besźel and Ul Qoma:

I don’t think it’s feasible to use culture or geography to further narrow down the location. Somewhere you have to leave reality and enter fiction. Moreover, this region is full of language and cultural islands, historic borders, and so on, which makes about every location within the region depicted above equally plausible in this respect.

I've tried to pinpoint on the map, but at best I can say that is somewhere in SE Europe, between Adriatic and Black Sea, probably north from Aegean Sea and south from Hungary/Romania. 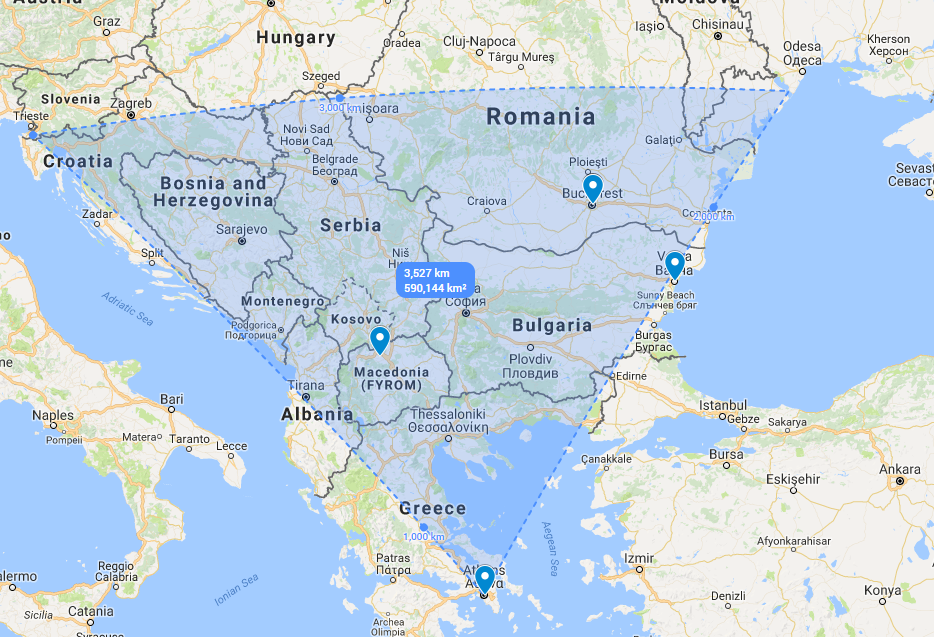 The provided information is (intentionally) not really sufficient:

The Ottoman Empire was big - really big, and its border were changing a LOT over the years: At 1882 it was covering most of the region: 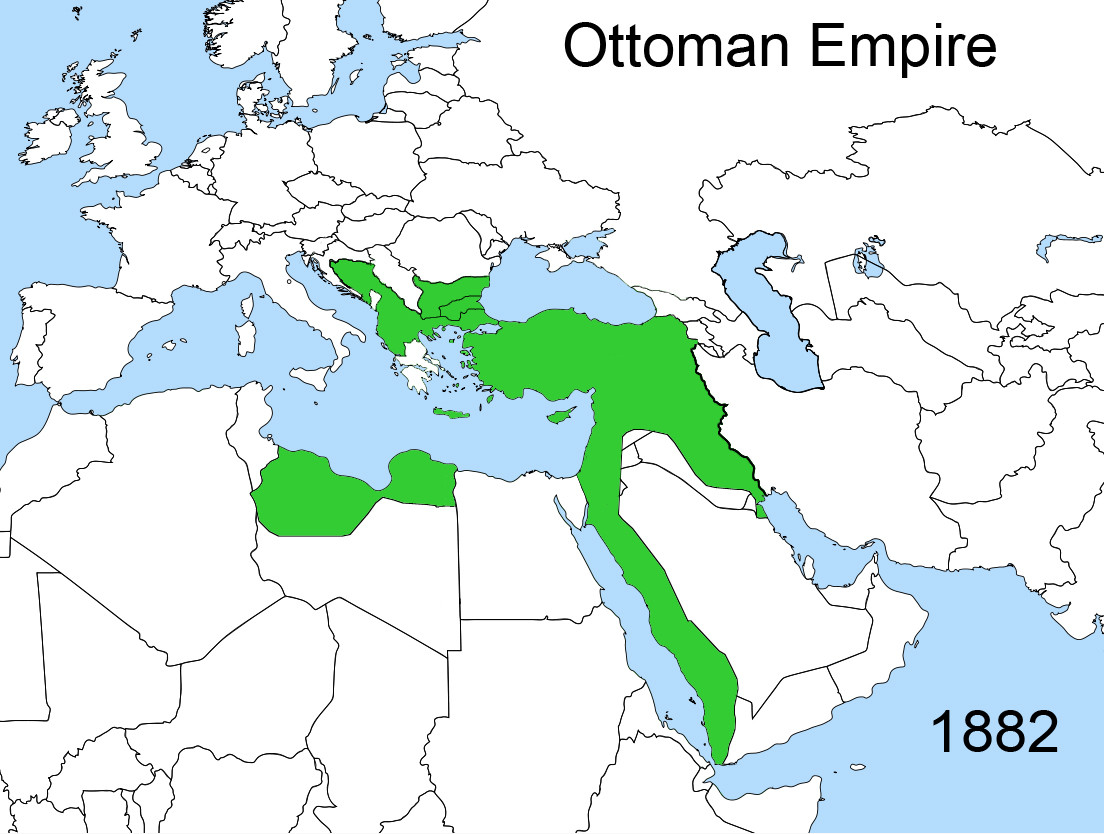 Then lost Bulgaria in 1912 and most of the Balkans by 1913. You can expect, that those territories will still have culture heavily influenced by the Ottoman period.

Language helps a little bit: Bosnia, Serbia and Moldova use both Latin and Cyrillic alphabet, Bulgaria and Ukraine use Cyrylic, Greek has its own alphabet, the rest uses Latin one.

Flying and travelling distance won't say much, since the distance between the corners of the triangle that I've made on the map are barely 1000 km long - close enough for any plane or car trip.

My presumption has been that the "cities" might be based upon Sarajevo, given the cultural history between east/west, Christian/Muslim, Cyrillic/Latin alphabets, Ottoman/Austrian imperial history, etc....

Beszel Now this showed an English speaking shanty town looked like Palestine territory . (English language being used was a to throw you off but English resembled Arabic style writing)

the far right nationalists asking for a separate state but tried to show the irony that they are skinheads. Meaning skinheads and Palestinians asking for freedom are one and the same thing.

Then , people who believe in unification of the two cities not exactly Palestinians by showing a bit of Berlin there.

The ill developed city shows the same image as an occupied land People from Beszel working for better opportunities in Ul-qoma-- shows you something about areas where Israelis and Palestinians co exist.its not all war as media paints.

The see and the unsee shows how both citizens are trained to ignore what atrocities are carried out; what social inequality exists and what barriers exist between both cities.it mostly exists in conflicted areas again like Palestinian and Israelis.

peace will never come to both cities as Ul-qoma has chose to accept the problems and ignore them completely. While Beszel has chosen to dwell in their hate and continue to be exploited by people SEAR AND CORE ( who don't want peace in any shape and form between two cities ) who they think will bring peace to them ( they talk to Americans for peace treaties at Camp David)

Orciny is the metaphor in this black comedy/ peace will only come when we die where all people are equal. No time and space laws hold. You are only invited by death

It seems to me that the cities best represent the idea of Israeli/Plaestinian divided territories, so that is where I tend to mentally place them.

https://en.wikipedia.org/wiki/Georgia_(country) its the country where some of the scenes were shot :) even many signs are on Georgian :)

Not the answer you're looking for? Browse other questions tagged china-mieville the-city-and-the-city or ask your own question.