How did Anakin Skywalker get into the Trade Federation Droid Control Ship?

I watched 'The Phantom Menace' and one of the main things I don't understand is how Anakin Skywalker managed to get into the hangar of the Droid Control Ship.

There were a lot of pilots trying to get in, but they couldn't get past the defences, so why didn't they just go in the same route that Skywalker did? Were the defences not working there?

In-Universe: Anakin just jammed controls seemingly randomly (perhaps guided by the force, there is no direct evidence to that, but where the Chosen One is involved, it is reasonable to imply it), and turned on autopilot guiding him to the ship. Again, possibly due to strong force influence he could avoid enemy fire and defenses.

Out-of-universe: Yes, it is a re-make of "a small, one-man fighter should be able to penetrate the defensive systems" idea, kinda 'Easter egg' for the fans of the original trilogy.

If you look closely, you can see two squadrons of droids leaving the hangar (one each side of the entrance) as Anakin's out-of-control fighter enters the hangar.

The shields were down for that reason. Once inside the hangar he uses his special podracing piloting skills to avoid crashing until he lands. He was the only human that could pilot a podracer, so probably a normal pilot would have crashed inside the ship.

This answer is more speculative than I'd like it to be, so if someone answers with more references I can delete this. Anyway, it seems to me like there are a few explanations for this:

1 - The Naboo pilots were inexperienced It seems to me like the Naboo Royal Space Fighter Corps wasn't really designed or trained for large-scale warfare. Naboo fell almost immediately to the Trade Federation, and until the Clone Wars it seems like the Republic didn't have or need a standing army, so based on this evidence it seems like Naboo's pilots were never expected to take on capital ships. Thus, a tactic like 'fly through the hangar to the reactor and blow it up from the inside' just never occurred to them, because they've never actually fought a ship that had a hangar.

2 - The hangar isn't always open. I'd guess that most of the time, the ship's shields are going to be covering the hangar, preventing ships from entering and/or leaving. So maybe Anakin just got lucky and flew through just as a droid ship was entering/leaving, and the other pilots didn't think they'd have a chance of pulling that off intentionally.

3 - No one knew what the inside of the ship looked like. Like I said, Naboo fell almost immediately to the Trade Federation, and it seems like no one was prepared for the invasion. So there's a good chance that the pilots involved in the battle were seeing the droid control ship for the first time. And while they might've been able to detect critical systems from their outside view, they'd have no way of seeing the inside of the ship until they actually got inside. For all they knew they'd fly right into a wall milliseconds after entering the hangar (and really, who would design a ship that lets the enemy fly straight through to the reactor?).

From all of this, it seems to me like the other pilots were defaulting to "shoot the outside, hopefully we can break through the shields eventually" while Anakin happened to accidentally do a bunch of things that should have killed him but ended up working in his favor. Kinda like pretty much everything Jar-jar did in the ground battle.

During the battle, his ship is shot, and he loses control. He then crashes into the hanger bay, weaves his way past several carriers and blast doors trying not to hit them, and finds himself deep inside the Control Ship.

The other pilots were trying to blow the ship up from the outside, and were unable to penetrate the deflector shields with their attacks. Threading a small fighter through narrow twists and turns (i.e. completely the opposite environment to open space, which they were trained for - but a perfect match for a pod racing course) was so absurd an idea that it simply never occurred to them.

This is addressed in the (canon) Star Wars: Battles That Changed the Galaxy factbook. In brief, the hangar is normally shielded to prevent intrusion, with the shields being lowered in order to allow the egress of their own ships. Anakin's lightning-fast attack run surprised the 'traffic control' droids who were supposed to be preventing precisely this sort of attack.

Rapid Infiltration: In a flash, a single Naboo starfighter rocketed through the crescent-shaped hangar of the droid control ship, catching traffic control crews off guard. They were unable to report the situation to the command bridge in time 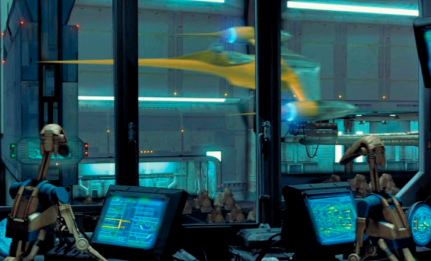 I am convinced that the Lucrehulk at least had shielding for the hangars all around its inner circle and superstructure, as well as the main hangars, if not blast doors like we see in the blockade over Pantora in TCW. A powerful and profitable mega-corporation that can field hundreds of these retrofitted cargo ships and outfit them with the hundreds of thousands of tanks, similar number of starfighters and millions of battledroids ought to be able to afford a simple safety feature for their ships.

Anakin got in purely out of luck. I am convinced that had the Vuutun Palaa not sortied its fighters and hunkered down, it would have weathered the attack. The N-1 can only carry ten torpedoes, and its lasers were probably designed to combat ships ranging from starfighter to maybe corvette or medium freighter-class.

17
How did Anakin and Obi-Wan intend to rescue Chancellor Palpatine?
6
Is there any in universe reason for the Trade Federation having their reactor run through the hangar bay?
6
Is there evidence that Lucas intentionally introduced similarities between Episodes I and IV?
48
How did Obi-Wan survive the trip to Naboo?
18
Why did Qui-Gon and Anakin need to hide the fact that Anakin built the pod-racer?
3
What is the power source of Anakin Skywalker's podracer?
5
Is the concept that humans are poor pilots seen anywhere else in the Star Wars franchise?
6
How did Capt. Panaka read R2's serial number?
58
Why does the Trade Federation become so alarmed upon learning the ambassadors are Jedi Knights?