Which was the comic where Steve Rogers was able to hold Thor's hammer? [duplicate]

Which was the comic book where Captain America became worthy to hold Mjolnir ?

He has done so on at least two occasions: 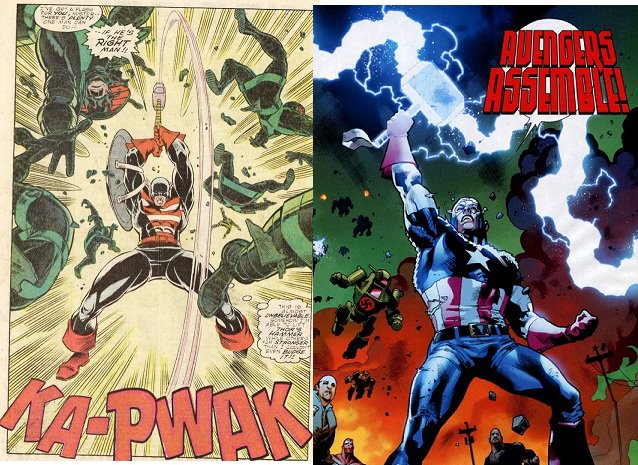 During a period where Steve had abandoned the mantle of Captain America and gone independent as "The Captain." Cap paid a visit to his buddy Thor at Avengers Mansion, only for the team to be attacked by Grog and the Demons of Death (great band name). When Thor was subdued by the combined might of these villains, Cap was able to lift Mjolnir long enough to send it back to its rightful owner.

Cap had the chance to wield Mjolnir for a slightly longer stretch in the event Fear Itself. With his trusty shield having been shattered by the Serpent, Cap had nothing but some automatic weapons to battle the Serpent's minions. Luckily for him, Thor lost his grip on Mjolnir during his battle with his uncle. Mjolnir crashed to Earth, and Cap hoisted it high and led the charge.

Some more info who was able to wield Thor's hammer

Not the answer you're looking for? Browse other questions tagged marvel comics captain-america episode-identification mjolnir or ask your own question.

10
Which MCU characters are shown to be worthy of Mjolnir in the comics?

17
Was skinny Steve Rogers also played by Chris Evans?
10
Would it be possible for Captain America to catch Mjolnir instead of his shield?
91
Why isn't Captain America worthy of Mjolnir?
44
In which comic was it revealed that Alfred was the Joker?
15
Which was the comic where a kid mistakenly called Deadpool Spider-Man?
26
Can anyone lift Mjolnir when it is disguised?
17
Why doesn't Mjolnir give Captain America Thor-like armor?