Which was the comic in which Wonder Woman got married to a green alien/creature?

I saw a Wonder Woman comic cover once, but can't remember which one. It had Wonder Woman getting married to some green alien dude or something on it. Did she really got married in it or was it just for the cover ?

This is Wonder Woman #155 "I Married a Monster!" in which Wonder Woman is depicted (on the cover) marrying Mr. Monster 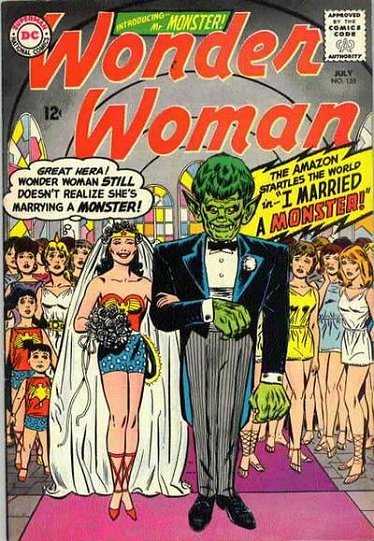 She was genuinely persuaded to marry him after he defies the Amazonian Army and shields her from falling rubble with his own body, proving his worthiness as a potential husband.

But eventually he ends up...

.... ditching her at the altar 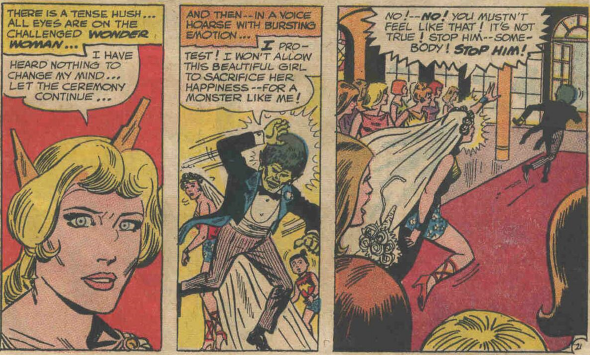 Not the answer you're looking for? Browse other questions tagged dc comics episode-identification wonder-woman or ask your own question.

8
Identify a story in which Watch Tower was crashed on the Moon and Wonder Woman murdered a guy
5
Has Wonder Woman got superpowers in 1974 TV series?
23
Can anyone, including Wonder Woman, resist the Lasso of Truth?
5
What exactly is happening in Wonder Woman 06 (2012)? What is the point of this entire story arc?
59
Did the writers of Wonder Woman have some kind of fetish for bondage, in the early comics?
20
Is Wonder Woman also a speedster just like the Flash and Superman?
5
Superman comic where he fights a progressively stronger alien creature
3
Green Lantern comic with Hal or Guy offering another character a pack of alien beer