Who are the oldest characters in A Song of Ice and Fire?

I know that a long life is not usual in the world in which A Song of Ice and Fire is set. That brings to me some questions:

Who is the oldest character that lives during (a part of) the books?

Who is the oldest character in Westeros' history?

As the question is not limited to humans, Leaf is the oldest. According to the books she's at least two hundred years old.

“Tell us what you saw.” From far away Leaf looked almost a girl, no older than Bran or one of his sisters, but close at hand she seemed far older. She claimed to have seen two hundred years.
ADWD, chapter 34

Spoilers unless you've read as far as A Dance With Dragons:

Brynden Rivers aka Bloodraven aka the three-eyed crow is older than Maester Aemon when Bran finds him still alive but embedded in a weirwood tree's roots. He was born in 175AC, 23 years before Maester Aemon, so he is about 125 years old during the events of the books. The three-eyed crow is confirmed as Brynden Rivers in A Dance With Dragons when he says: “I wore many names when I was quick, but even I once had a mother, and the name she gave me at her breast was Brynden.”

In A Feast For Crows at the end of the book when Samwell reaches the Citadel Maester Aemon is described as the oldest man in Westeros at 102 years old.

He was more than just the oldest living maester. He was the oldest man in Westeros, and lived through more history than Archmaester Perestan has ever learned. He could have told us much and more about his father's reign, and his uncle's.

He had been the thirteenth man to lead the Night's Watch, she said; a warrior who knew no fear. 'And that was the fault in him,' she would add, 'for all men must know fear.

The Night's Watch was founded over 8,000 years ago after the Long Night. If we add a bit of reasonable bit speculation and historically it seems the longest a Lord Commander served was 60 years... means that he served ~780 years after the founding of the Watch, which would make him over 7,000 years old

Although GRRM himself doesn't really buy that...

As for the Night's King (the form I prefer), in the books he is a legendary figure, akin to Lann the Clever and Brandon the Builder, and no more likely to have survived to the present day than they have.

According to David Benioff, one of the showrunners of Game of Thrones, Melisandre is "several centuries old". In HBO's feature Game of Thrones Season 6: Inside the Episode #1, he says this information comes from conversations with George R. R. Martin, so presumably this is the case in the books as well.

"Several centuries" is vague, but clearly makes her older than characters like Master Aemon and Bloodraven, and probably also Leaf, who claims to be 200 years old (and "two" is not "several" in my book). Although it's not canon information, Melisandre's actor Carice van Houten has claimed in interviews that Melisandre is 200–300 years old and 400 years old. 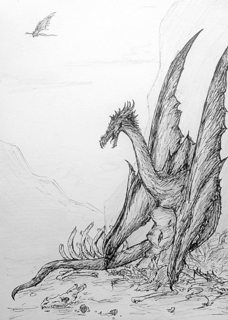 [It was] A wild dragon, a scavenger and killer of hatchlings, never tamed and vanished at war’s end.[1]

The Cannibal is most likely still alive and roaming freely in or around the Shadow Lands. Having roots likely around 114BC[1], If The Cannibal is still alive, then it would be a minimum of 414 years old, making it the oldest living character of this world[2].

The Weirnet
The "Weirnet" is a network of Weirwood trees which are all somehow connected. This allows the likes of Bran and Bloodraven to "connect" to it and witness events from the past, present and future. Being that the weirwoods are alive and growing, I would put this one down as a technicality.

Depending on how you measure age and life, the answer to both could be Daenerys' 3 dragons, which were laid as eggs 'eons ago', and were since turned to stone.

From what we know of Dragon's physiology, hatching a dragon egg requires both the physical development in the egg that normal lizards require, as well as some variation of magic, ritual etc.

Whether the Dragon is 'alive' from the moment that it has physically grown enough in the egg that it has the potential to hatch, or if it only becomes alive when it does hatch is unknown, and mayby unknowable.

In the T.V. Show Game of Thrones in season 6 episode 5 we see a scene where Leaf plunges a shard of Dragonglass into a man's heart. When Bran awakes from this vision he says, "It was you. You made the white walkers." Leaf then says, "We were at war. We were being slaughtered. Our sacred trees cut down. We needed to defend ourselves," "From whom?" "From you, from men." So the war against the first men happened thousands of years ago. Now if this white walker they created was the first white walker that means that this happened before the Long Night making Leaf at least 8000 years old. Besides Leaf there is another character 100+ years old. That would be Brynden Rivers. If he was born around 175 AC that would make him 125 years old though he stopped aging at the age of 77.

Not the answer you're looking for? Browse other questions tagged a-song-of-ice-and-fire age or ask your own question.

55
Who or what is the oldest sentient being in Tolkien's lore?